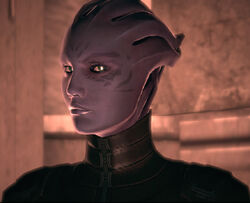 Shiala is an asari, a powerful biotic and former follower of Matriarch Benezia. Commander Shepard's team encounters her on Feros.

Shiala was an acolyte of Matriarch Benezia for nearly two centuries, respecting her wisdom and biotic ability. Along with many of Benezia's followers, Shiala accompanied the matriarch aboard Sovereign as Benezia tried to guide Saren Arterius down a gentler path. When Benezia failed and became indoctrinated, Shiala also became one of Saren's thralls.

Shiala is voiced by Gwendoline Yeo.

Shiala willingly served Saren and accompanied him to Feros, where Saren encountered the Thorian and discovered that the ancient alien plant had the Prothean Cipher he needed to understand the vision from Eden Prime. He managed to convince the Thorian to accept a trade. Shiala was 'sacrificed' to the Thorian and absorbed by it, sharing a single consciousness. She then used her biotics to gain the Cipher, which she transferred to Saren's mind. Once he had what he needed, Saren abandoned Shiala to the Thorian and ordered the geth to destroy it, hoping to prevent Shepard from gaining the Cipher. 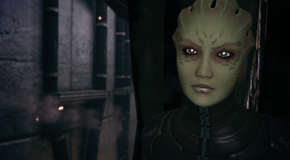 When Shepard's team arrived, the Thorian was somehow able to create clones of Shiala which served to communicate with Shepard. These clones were also biotics who attacked Shepard's squad as they tried to wipe the Thorian out. After destroying the Thorian, Shiala was freed and was fully herself again. She told Shepard of Saren's actions and how Benezia became a slave to his cause, and explained about the Cipher. Knowing the vision was the key to finding the Conduit, Shiala touched Shepard's mind and directly transferred the Cipher. She then asked to be allowed to go to the Zhu's Hope colony and help them rebuild as penance for what she had done.

Shepard can then determine Shiala's fate — by releasing her to help Zhu's Hope, Shepard will gain Paragon points, which is also the default choice if Shepard is more concerned with leaving Feros. Alternatively, Shepard can determine that Shiala "switches sides too often" and thus decide to execute her; Shiala will accept her fate and kneel, offering no resistance as Shepard shoots her in the back of the head.

Shiala is the only individual who has managed to completely overcome Sovereign's indoctrination without resorting to suicide. This is likely because she was linked directly to the ancient Thorian and 'indoctrinated' by the plant being in turn. After the Thorian died her mind was her own again. 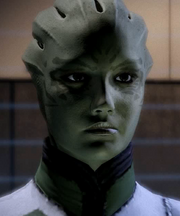 If Shepard allowed Shiala to live after killing the Thorian, she can be found on Illium, investigating a medical contract made with the colonists of Zhu's Hope. Shepard can offer to negotiate with the company on Shiala's behalf. In the months after her exposure to the Thorian, Shiala's skin pigmentation changed to green — similar to her clones — and her biotic abilities became unstable. She also mentions disconcerting dreams of her time with the Thorian.

If Shepard helps her, Shiala also professes an interest beyond mere friendship, saying: "Maybe sometime, when I'm not organizing the colony and you're not... doing whatever you do." She then smiles and strokes Shepard's arm before leaving.

However, if you allowed the Feros colony to die (but allowed Shiala to live after freeing her from the Thorian), then her dialogue and interactions with Shepard will change. She will say instead that she is a commando and doesn't know how to help people, but she will try. She will also not flirt with Shepard once you help her.

Retrieved from "https://masseffect.fandom.com/wiki/Shiala?oldid=208191"
Community content is available under CC-BY-SA unless otherwise noted.