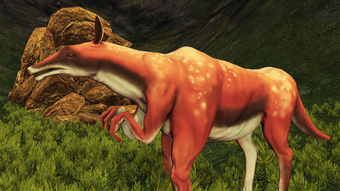 The Shifty Looking Cow is a Space Cow found on the planet Ontarom, in the Newton system of the Kepler Verge.

An otherwise normal member of the species, talking to it also does nothing. When Shepard turns around, however, the Cow promptly begins stealing the Spectre's credits slowly, and will even follow the Commander around. It can be found near the southwestern corner of the operational area, near a deposit of gold.

“I love the history of the Shifty Cow easter egg. When the character artists designed the space cow with two extra arms, Preston, our lead designer, was a little creeped out. His comment was "You can’t trust any animal that can milk itself." Those extra little hands look so... grabby. So Preston came up with the idea of Shifty Cow. Turn your back on him, and those creepy little hands are going to go to work. Kiss those credits goodbye.”