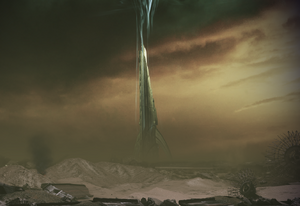 The Shroud is a salarian construct on the surface of Tuchanka. It was originally built to stabilize the atmosphere of Tuchanka due to the self-induced nuclear winter of the krogan.

The Shroud was deployed through the use of a number of ground-based towers, which acted as mass-drivers that launched the Shroud's components into orbit. Later, all but one of these towers were destroyed; this remaining tower became known as the Shroud, although the label is technically incorrect. The Shroud tower was repurposed to disperse particles and chemicals into Tuchanka's atmosphere, primarily for climate-control purposes.

After the Krogan Rebellions, the Shroud was sabotaged by an STG team to prevent any potential cure for the genophage from being disseminated through it.

The Shroud was constructed 2,000 years ago as part of a salarian scheme designed to uplift the krogan. The Council was losing the Rachni Wars; in its desperation, it turned to the krogan, giving them new technology in exchange for foot soldiers. The Shroud was purely part of a successful ploy to get the krogan on the side of the Council.

During the ensuing Krogan Rebellions, after the genophage was released the Shroud was sabotaged by salarian STG agents to ensure that a cure could not be easily disseminated.

The Shroud is located in an old arena built as a shrine to Kalros, the mother of all thresher maws. It was placed there in the hopes that the threat would deter people from reaching the Shroud and thereby discovering the STG sabotage and/or spreading the cure.

In an attempt to secure an alliance between the turians and the krogan, Commander Shepard and Mordin Solus (or, alternatively, Padok Wiks) must cure the genophage, but to do that they need a way of dispersing the cure across the entire planet. The Shroud is determined to be the best solution for distributing the cure; however, a Destroyer-class Reaper is found to have seized control of the tower for the purpose of poisoning Tuchanka's atmosphere. Shepard and their squad dodge the Destroyer's beam to reach two maw hammers, which draw Kalros to the site. Kalros attacks the Destroyer. The Reaper smashes Kalros into the Shroud, damaging it, but Kalros drags the Reaper underground, effectively incapacitating it and allowing Shepard to proceed.

Afterwards Shepard reaches the Shroud where Mordin/Wiks is done finalizing the cure, although a temperature malfunction in the control room is preventing its viable distribution. Due to countermeasures put in place by the STG, remote bypass is impossible and the salarian scientist must access the controls manually in order to ensure the temperature range is acceptable. Regardless of whether the cure is distributed, the Shroud is eventually destroyed as it explodes.

Retrieved from "https://masseffect.fandom.com/wiki/Shroud?oldid=526660"
Community content is available under CC-BY-SA unless otherwise noted.