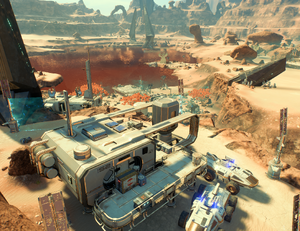 Site 2: Resilience is the site of the second Andromeda Initiative outpost on Eos. The site was supposed to be a second chance to start colonization efforts after Site 1: Promise on the planet but almost immediately it came under kett attack.

The site consists of two levels surrounded by small radiation shield bubbles located on the edge of an expansive lake. The upper level contains just one building which is inaccessible but has a few scanable items and a crate.

The lower level, closest to the lake is a jumbled mess owing to the ferocious attack the settlement sustained soon after becoming established. Scattered among the structures are various minerals, especially Fluorite, containers of loot, and scanable objects. There are two buildings and a landing pad on the lower level.

There are no residents at Site 2 as the site's residents were killed in the kett attack on the base.

The following Priority Ops missions take place or are acquired at Site 2:

The following Allies and Relationships missions take place or are acquired at Site 2:

The following Heleus Assignments missions take place or are acquired at Site 2:

The following Additional Tasks take place or are acquired at Site 2:

On a terminal on the second floor of the main building:

How does it feel to be 28? I'm sorry I can't be with you, but I hope you live it up with your friends on the Nexus. Go wild!

Did you get my gift? I built the kennel especially for him. I know he can't replace Buster, but they say if you raise an adhi from a pup, it'll bond to you for life. Give him a good name for me--and talk me up so he knows I'm on your good side.

I hope you have a birthday as amazing as you are. Next year, we'll celebrate together. You, me, and the lil' scrapper. I love you!

I received your request. I apologize, but a transfer isn't possible at this time. I understand your sister was on the turian ark and that you'd like to be out there looking for her. But with no contact from Natanus since our departure from the Milky Way, your efforts would be wasted. The Initiative needs you here on Eos, researching methods to sustain viability. Your work is important for us all. You'll have to be patient and wait for word of Natanus to surface.

Hope everything's going okay down there. Rumors are spreading about the unfriendly locals, but I know it's nothing you can't handle.

Just wanted you to know the thing we talked about last week is happening. Sloane gave the sign tonight. We're doing it tomorrow. If it all goes as planned, I'm bringing you back here to celebrate. If not, well it's been fun. No regrets, right?

Stay safe out there. Talk to you soon.

Retrieved from "https://masseffect.fandom.com/wiki/Site_2:_Resilience?oldid=514372"
Community content is available under CC-BY-SA unless otherwise noted.