Mass Effect: Andromeda
Mass Effect Andromeda: Nexus Uprising
“The Initiative was just another empty promise. The only person I can count on to change things is me.”

Sloane Kelly is the leader of the Outcasts, the criminal faction controlling Kadara Port.

Sloane served in the Alliance, participating in the Skyllian Blitz, but was discharged after punching a superior officer for "bureaucratic bullshit." Although some of the Initiative's senior leadership had concerns about Sloane's temper, Jien Garson was impressed by her passion, frank attitude, and resourcefulness.

Sloane Kelly was later employed by the Andromeda Initiative as head of Nexus security. During the Nexus uprising, Sloane and the new Initiative Director, Jarun Tann, had a falling out. Sloane sympathized with the rebellion and was vehemently against using the krogan against the mutineers; thus Sloane took it personally when the Director went behind her back to make a deal with Clan Nakmor in order to violently put down the insurgents while she was negotiating with them.

Upon learning of the Director's intervention, Sloane switched sides and joined the rebellion. The rebellion soon crumbled after the assassination of its leader, Calix Corvannis, and Sloane was left to represent the grievances of the remnant mutineers.

Director Tann gave Sloane and the rebels the ultimatum of either going back into cryostasis or be exiled to the hostile planets. Sloane along with the other mutineers chose exile. Eventually a large portion of these exiled Outlaws found the planet Kadara, and Sloane amassed a group of followers from the exiles called the Outcasts and drove out the local kett forces from Kadara Port. Ever since then, the Outcasts became the ruling power in Kadara and began raiding the Nexus' convoys, transports, and scout teams for supplies and equipment. 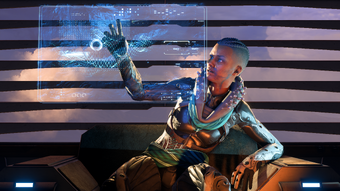 While attempting to locate the Archon's flagship, Pathfinder Ryder meets with Sloane in Outcast Headquarters, hoping to secure the release of Angaran Resistance traitor Vehn Terev. Regardless of the way the discussion goes, Sloane refuses to release him since his death is required to appease the local angara. However, Sloane will allow Ryder to interrogate Vehn until it is time for his execution.

Sloane's authority over Kadara Port has been called into question by many of its inhabitants. Sloane rules Kadara Port with an iron fist and she doesn't shy away from shows of force. Captive hostiles like the kett are publicly executed and dissidents have had their heads displayed on spikes as grisly warnings to their enemies. The local angara accept her rule since Sloane liberated them from the kett and are also mollified with parties and empty gestures. Although Sloane makes a show of being pro-angaran, in truth she prioritizes the Outcasts. By the time Ryder arrives, a new faction known as the Collective has already emerged to disrupt her operations and overthrow her. 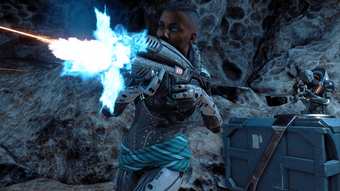 Sloane leaves Kadara Port with her second in command Kaetus and goes to Draullir to finish off the last of the kett stragglers the Outcasts drove out, provided Ryder tracks the aliens beforehand. Sloane doesn't want to let someone else fight her battles, though she sees nothing wrong with the Pathfinder doing the legwork as that's what lapdogs are supposed to do. Kaetus went behind her back to give Ryder the mission, and Sloane plans to confront him about it once it's over.

Kaetus is worried Sloane's absence from the port might give the Collective ideas, though she wants him to relax a little. Before they finish the argument, the kett are alerted to their presence, resulting in a firefight that leaves no kett standing. Following the skirmish, she and Kaetus stay behind the cave for a while to dispose of the bodies, to maintain the official stance that all kett were defeated by Sloane when she won the port.

Night on the Town[edit | edit source]

Sloane periodically hosts social gatherings at Outcast HQ, though she deems them necessary evils of governance. She sees the Pathfinder's presence at one of her parties as a reminder to tell Kaetus to vet the guest list more thoroughly next time. She allows Ryder to freeload on the refreshments like everyone else, provided they stay out of trouble.

If Ryder tests Umi Henon's experimental drink, they become inebriated enough to sit on Sloane's chair when the Outcast queen briefly leaves. Sloane is not amused when she returns to see the Pathfinder on her throne, though she wordlessly regains possession of it by the time Ryder wakes up from a brief blackout.

The Collective become a grave concern for Sloane when she learns they turned some of her men and used them to beat up Kaetus. They use him to send a message: the Charlatan wants to meet in order to settle things once and for all.

Since Sloane's Outcasts were compromised, Ryder is the only person she could trust to act as her back-up in the duel. The duel will decide who controls Kadara Port and Ryder can choose to either save Sloane from being assassinated by a Collective sniper or let her die. 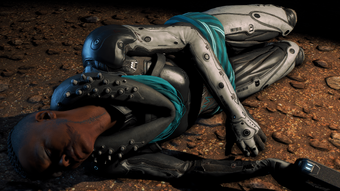 If Ryder does nothing, Sloane is shot in the back and lives only long enough to realize the Charlatan set her up. Her corpse is carried away, and in the aftermath Kaetus swears to avenge her from his holding cell.

Should Ryder choose to save Sloane, she retaliates by shooting the Charlatan's pistol from his hand. She screams for Ryder to kill the Charlatan, but he manages to escape in a transport, earning a rebuke from Sloane whether the Collective leader was injured or not.

In the aftermath, the Outcasts' rule on Kadara Port is reinforced and Sloane institutes a purge of known Collective sympathizers. She allows the Initiative to settle an Outpost on Kadara for the sake of the Pathfinder, stating that while she will never trust the Initiative, Ryder is "out of the doghouse", on the condition that the outpost pays a regular protection fee. Later on she assists Ryder in the final battle for Meridian against the Archon.

Retrieved from "https://masseffect.fandom.com/wiki/Sloane_Kelly?oldid=527740"
Community content is available under CC-BY-SA unless otherwise noted.