Solcrum is the largest moon of the gas giant Notanban. It has a trace atmosphere of krypton and xenon. The crust is composed of various metals with deposits of sodium. As with every body in the solar system, the surface is scorching hot and thoroughly irradiated by the blue giant Grissom. Surface excursions without proper protective gear are certain to prove fatal.

On approach to Notanban, Normandy's passive sensor array intercepted a fragmentary coded transmission from the surface of Solcrum. Attempts to decrypt the message were fruitless; it does not appear to be in any software coding language used by the Citadel races. 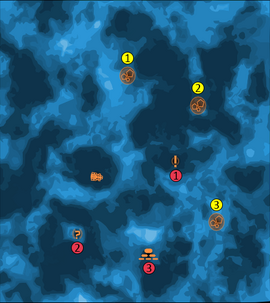 Notanban is visible in the sky to the north while Grissom lies prominent to the west. As with several worlds in the Armstrong Nebula, Solcrum features a moderate wind that has a noticeable but not debilitating effect on visibility.

Solcrum's operational area is on rugged terrain, and most of its points of interest lie at the top or bottom of hills. While the Mako likely won't be scaling mountain-sized cliffs, it is still recommended to stick to what flat terrain there is when traversing the moon.