Mass Effect
“We impose order on the chaos of organic evolution. You exist because we allow it, and you will end because we demand it.”

Sovereign is the flagship of the rogue Spectre Saren Arterius. An enormous dreadnought larger than any other ship in any known fleet, Sovereign is crewed with both geth and krogan. At two kilometers long, its spinal-mounted main gun is likely capable of penetrating another dreadnought's kinetic barriers with a single shot.

The prevailing opinion is that Sovereign is a geth construct, while others believe it is a Prothean relic. Its design, however, hints at a more alien and mysterious origin. The attack on Eden Prime demonstrated Sovereign's ability to generate mass effect fields powerful enough to land on a planetary surface. This implies it has a massive element zero core, and the ability to generate staggering amounts of power.

Sovereign is a gigantic starship of almost unimaginable power and sophistication. Commander Shepard originally believed Sovereign was a Reaper vessel that Saren Arterius found and somehow reactivated, but discovers Sovereign is in fact an actual Reaper, a fully sentient and extremely powerful AI, which is why the geth obey its commands. They see Sovereign as the pinnacle of AI evolution and worship it as a god. However, Sovereign regards Saren and the geth as no more than tools to aid in the return of the Reapers and is even insulted by the worship the geth "hurl" at it. 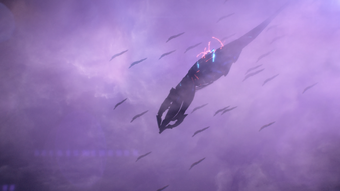 A vanguard of the Reapers left behind to instigate their eventual return from dark space, Sovereign has spent the last 50,000 years in a state of near-constant hibernation, waking periodically to assess the evolution of organic races. It was the duty of the starship to bring about the next revolution of the cycle, and serve as the harbinger for the return of its kind by sending a signal to the keepers on the Citadel. This would make the keepers open the Citadel relay, a mass relay that leads to dark space, and usher the Reapers through.

Sovereign is also able to control organic life through the process of indoctrination. A subtle field or signal surrounds the Reaper, gradually affecting the organic's mind until they are little more than a shell of their former self, bent on doing Sovereign's will. Sovereign has nothing but contempt for any lesser beings, seeing them as fleeting and temporary, whereas the Reapers are eternal. It also seemed angered by the attempts of organic life to defend their claim to the Citadel, claiming "this station is mine." 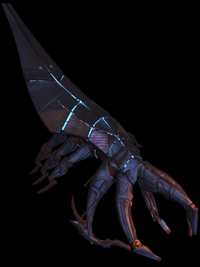 In around 2162, one of Edan Had'dah's survey teams discover Sovereign orbiting an uncharted world in an obscure star system near the Perseus Veil. Had'dah is a batarian entrepreneur who sends teams out to search for ancient alien technology, usually Prothean, which he would either sell or research for profit. However, when his people report their find, Had'dah soon realises he has something unprecedented on his hands.

Had'dah quickly isolates the survey team on the planet and searches for an expert who can help him unlock Sovereign's secrets. He eventually finds Dr. Shu Qian, a scientist specializing in AI studies who has defected from the Alliance.

Sovereign's indoctrination effect is already working on Qian. Even a brief visit to the "artifact" also affects Had'dah's mind, until the two are obsessed with researching the ship. During his investigation of an attack on the Sidon research facility, the Spectre Saren Arterius becomes intrigued by what he heard, wondering if Sovereign is the weapon he has been looking for to bring humanity to its knees. He kills both Qian and Had'dah and takes their research, then goes to find Sovereign for himself. 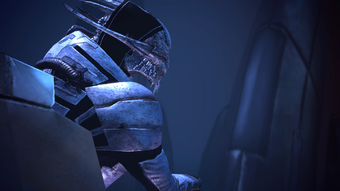 Despite Sovereign's contempt for all organic life, the failure of the signal to activate the Citadel due to Prothean sabotage forces it to investigate what had gone wrong, a task for which it requires the aid of organics. Vigil hypothesises it took many years—possibly even centuries—for Sovereign to assemble the pieces of the puzzle, working through agents and keeping its true nature hidden, since revealing its presence would have united all organic races against it. Gradually Sovereign pieces together the actions of the last Prothean survivors and discovers the Protheans sent a final message through their beacons that might lead it to the Conduit.

When Dr. Qian's research finally leads Saren to the planet it is orbiting, Sovereign now has the organic ally it needs—a powerful and well-connected Spectre. It makes an alliance with Saren, who thinks he can prove that organics could be useful to the Reapers, guaranteeing their survival when the cycle begins again. Saren doesn't realise that this "alliance" is empty: Sovereign sees him merely as another tool to be manipulated, used, and discarded. Saren takes Sovereign as his flagship, and is named as Sovereign's "prophet" to the geth. However, like so many others, Saren falls under the dominating effects of Sovereign's indoctrination. But he retains some free will, as Sovereign requires Saren's mind intact to find the Conduit and reactivate the Citadel relay. After so many years, Sovereign is finally bold enough—or desperate enough—to begin acting openly.

When a Prothean Beacon is unearthed on Eden Prime, Sovereign knows it might contain the location of the Conduit. As a machine it is unable to access the vision itself, as the Prothean message was coded so that only organic minds could understand it. Sovereign brings Saren and an army of geth to the colony to retrieve the beacon. Eden Prime is devastated by the assault, not only from Sovereign's weapons, but also from its engines, which burnt crops for miles around. A distress call is transmitted by the marines on the surface before they are killed, alerting the SSV Normandy. Nonetheless, Saren uses the beacon and through him, Sovereign learns more about the Conduit, a reverse engineered mass relay made by the Protheans, which could function as a backdoor to the Citadel. 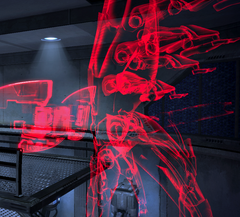 Sovereign eventually returns to Virmire, where Saren has built a base and breeding facility for his krogan army. The base is attacked by Shepard, who uses another beacon in Saren's communications lab and alerts Sovereign to the commander's presence. It speaks to Shepard directly, expressing its disdain for organic life and claiming Shepard's attempts to stop the Reapers from returning are futile. Sovereign then attempts to reach Shepard's position on the surface, but Shepard destroys the base and escapes in the Normandy before Sovereign arrives. The encounter with Shepard leaves Saren with doubts about the Reapers, eating away at his loyalty to Sovereign, so Sovereign implants him with cybernetics to control and fully indoctrinate the turian.

With the help of Shiala and Matriarch Benezia—other victims of Sovereign's indoctrination—Saren finally finds the Conduit on Ilos. He travels through it to the Citadel with a small army of geth and takes control of the station from within. Meanwhile, Sovereign leads a huge armada of geth to attack the Citadel Fleet. Saren closes the Wards around Sovereign while it positions itself at the Citadel Tower, extruding numerous small tubes from its underside and into the structure. It then begins to override the station's controls and manually open the relay to dark space.

The Fall of the Vanguard 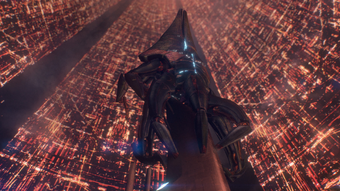 Shepard's squad follows Saren and fights toward Sovereign's position through the Citadel. Saren offers the commander the chance to join the Reapers "and experience a true rebirth". When Saren fails to stop Shepard and dies (either in a battle to the death with Shepard, or by committing suicide to escape the Reaper's hold on his mind), Shepard then manages to input a data file made by Vigil to temporarily prevent Sovereign from gaining full control of the Citadel.

In a bid to stop Shepard, Sovereign reanimates Saren through the cybernetic implants in his corpse and links his consciousness to it; reducing the latter's body to a Husk-like state. Sovereign then attempts to destroy Shepard and the squad inside the Citadel Tower with its avatar, while simultaneously devastating the Alliance Fifth Fleet in the space battle outside. Upon the destruction of Saren's body, the signal that linked to Sovereign becomes corrupted and causes Sovereign's shields to shut down. Under constant bombardment by a full armada of Systems Alliance starships, Sovereign is finally destroyed by a fatal shot from the Normandy, averting the return of the full Reaper fleet from beyond the galactic rim, and saving sentient life from utter destruction.

Despite the relief of the Council, Shepard recognizes that Sovereign was only a vanguard, and that the rest of the Reapers are still waiting to return eventually.

If Legion is activated and allowed to stay on the Normandy SR-2 in 2185, it provides additional information regarding Sovereign. Legion states that Sovereign identified itself to the geth with the name Nazara and that the title 'Sovereign' was coined by Saren, although it would still address itself as Sovereign to beings that know it as such. Legion describes that Sovereign had been searching for allies for over a millennium in order to bring about the cycle once more, and also provides some insight into some of the more enigmatic statements made by Sovereign on Virmire, such as "We are each a nation," referring to how both the geth and Reapers have numerous AI processes running in the same physical construct (possibly many more in the case of the Reapers). The quote is put further into perspective when the nature of Reaper construction is revealed aboard the Collector base, when it is discovered that each Reaper is constructed from the genetic material of a particular sentient race - a "nation."

After its destruction, most of Sovereign's debris rained down on the Wards. Between rescue workers looking for survivors and the keepers cleaning up the mess, little of Sovereign's technology could be studied. Some turian researchers discovered that Sovereign's main gun used an electromagnetic field to fire a stream of molten metal at a fraction of the speed of light. These turians reverse-engineered their own version soon after, dubbed the Thanix Cannon. However, what remained was not enough to convince the Council that Sovereign was anything more than a geth construct. Some pieces were recovered by Cerberus to fit into the AI onboard the new Normandy, to use as anti-Reaper algorithms.

It is also implied that Sovereign (or another Reaper operating under the same objectives) was responsible for indoctrinating the rachni queens, resulting in their overly aggressive response to Citadel scout teams and causing the Rachni Wars. 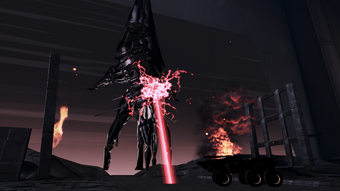 Dr. Garret Bryson has a fragment of Sovereign stored in his lab on the Citadel. Shepard, in the process of investigating the lab for clues regarding Leviathan, either mocks the fragment on closer inspection or just hopes that the thing was shielded.

After rescuing Bryson's daughter Ann from the Reapers on Namakli, the doctor informs Shepard that the fragment is properly shielded and members of Task Force Aurora underwent regular psychological evaluations to prevent it from indoctrinating them while they studied it.

After convincing the Leviathan to join the war effort, Shepard mocks Sovereign's assertion that the Reapers have neither beginning nor end, observing that they now know the Reapers had a beginning, and maybe now they can provide them with an end.

In the movie "Blasto 7: Blasto Goes To War," the Citadel is attacked by Sovereign's fictional half-brother, "Sluggard," who is seeking revenge.