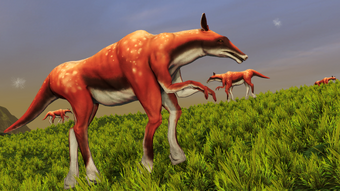 Space Cows naturally graze in herds. There are wild herds on Chasca, Nodacrux and Ontarom, as well as on Aite.

These creatures can be talked to, but they don't talk back.

Space Cows aren't startled by gunfire, vehicle ramming, or anything else. Killing them for whatever reason does not even elicit any reaction from their herdmates, but it may draw notice from the Galactic Humane Society should they learn of it as "animals are people too" in their view.

The Shifty Looking Cow on Ontarom steals credits while Commander Shepard isn't looking at it.

On Aite, Shepard can use the Hammerhead to kill Space Cows. The vehicle's VI dryly analyzes that "defenseless herbivores are no match for guided missiles." Persistently targeting the creatures leads to more comments from the VI, until it states that targeting systems do not require local wildlife to calibrate.