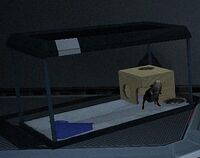 The Space Hamster is a pet that you can purchase at Citadel Souvenirs. Once purchased it appears in the Captain's Cabin of the Normandy SR-2 beside the entrance to the bathroom opposite your personal terminal. When you select the cage, it will come to the glass, look at you, then scurry back into its box with an audible squeak. Unlike the Fish, the Space Hamster doesn't need to be fed.

If it was purchased in 2185, the Space Hamster can be found scurrying around the Engineering deck of the Normandy in the same general area where Jack used to be. If caught, it returns to its former spot on the shelf in the Captain's Cabin and behaves identically to its 2185 incarnation from that point onward.

If Shepard took Dr. Bryson's Husk Head Experiment during the events of Leviathan, then upon interacting with the Space Hamster's cage the head may look up at it and scream.

When the Mysterious Figure takes over the Normandy, they attempt to throw out the space hamster, much to Shepard's chagrin. Fortunately, the hamster survives the encounter.

The Space Hamster can be found on the Tempest and acquired as a pet or sent away to a habitable planet during The Visitor.