View source
watch 02:34
Fire Emblem Warriors: Three Hopes - The Loop
Do you like this video?
Play Sound
“Spectres are not trained, but chosen. Individuals forged in the fire of service and battle—those whose actions elevate them above the rank and file.” 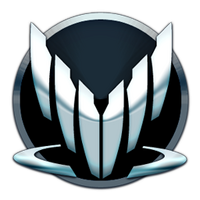 Spectres (Special Tactics and Reconnaissance, also abbreviated as ST&R) are agents entrusted with extraordinary authority by the Citadel Council, including the power of life and death over the inhabitants of the galaxy. They form an elite group selected from a number of different species, and their primary responsibility is to preserve galactic stability by whatever means necessary. Though they are generally considered as being above the law and have complete discretion as to the methods used to accomplish their mission, an individual's status as a Spectre can be revoked by the Council in a case of gross misconduct. Spectres work either alone or in small groups according to the nature of a particular task and to their personal preference.

The Special Tactics and Reconnaissance branch was founded in 693 CE, shortly before the Krogan Rebellions began, at a time when the Council was uneasy about the unchecked expansion of the krogan into Citadel space. The Spectres were chosen from the finest salarian Special Tasks Group operatives and asari huntresses, intended to function partly in an observational capacity, but also as the Council's first line of defense.

When the krogan finally turned against the Citadel, the Spectres were ready for them, using guerrilla tactics such as computer viruses and devastating sabotage to slow the krogan down before the turians joined the conflict. For years the activities of the Spectres were a Council secret, but their role was made public after the Krogan Rebellions were over. 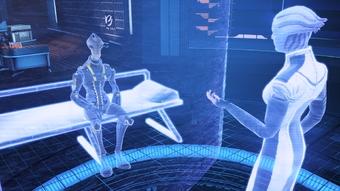 All records of the Spectres are sealed and only granted access with permission of the Council. It is not even clear how many there are: Alliance intelligence estimates that there are fewer than a hundred. Each Spectre is hand-picked by the Council after proving that they are an individual of exceptional ability and self-reliance.

Ambassador Anita Goyle and later her successor Donnel Udina were both desperate to get a human into the Spectres, as this would be the first step toward humanity gaining a seat on the Council. The first possible candidate was David Anderson, but his observer, Saren Arterius, sabotaged the evaluation, falsifying his report to make Anderson look responsible for casualties caused by Saren's own ruthless tactics during the mission. After Saren submitted his report, the Council refused Anderson entry into the Spectres.

The second candidate is Commander Shepard, whose outing of Saren as a renegade Spectre results in their induction into the Spectre ranks. This event happens before humanity attains its Council seat following Saren's attack on the Citadel a short while later.

In the last thousand years only two people have turned down an offer to become a Spectre, both of whom were asari matriarchs. Following Shepard's death and subsequent resurrection in 2185, the Commander can choose to become the third by declining to accept when offered reinstatement. 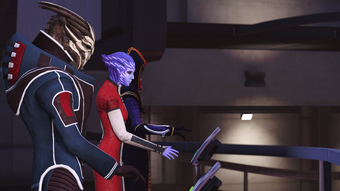 Spectres have no command structure. They answer only to the Council, and in some cases the Council prefers not to know the exact details of how a Spectre accomplishes their mission. Spectres act in any way they see fit, either with careful diplomacy or ruthless force, being officially above any law. Some people, like Executor Pallin, see Spectres as a potential risk because they are not constrained by the law, while others are in awe of them; Officer Eddie Lang mentions Spectres on vids are portrayed as super-agents always on some mission to save the galaxy. The assignment of a Spectre is often less contentious than a military deployment, but shows that the Council is aware of a situation.

Candidates for the Spectres typically have years of military or law enforcement experience before even being considered. The screening process involves background checks, psychological evaluations, and a long period of field training under an experienced mentor. Because of the rigorous selection process, Spectres might sometimes use unorthodox methods but they rarely go rogue. When it does happen, the only solution is to revoke their status, then send another Spectre after them. No one else would be up to the job.

The Spectres were modeled upon the salarian STG; granted supralegal authority instead of subordinate to common law, declared exempt from oversight instead of based within a command structure, and selected in recognition of a history of superior capability instead of trained. The STG is fully funded by the salarian government, however, as opposed to the financial independence expected of Spectres.

Spectres appear to be stripped of their status once they are declared legally deceased. They have to be reinstated in once proof of living (e.g. appearing in person and passing biometric checks) is presented. In Shepard's case, their title was never officially rescinded when they died, thus requiring only the approval of at least the human Councilor for full restoration of rights and privileges.

Shepard's Spectre status can be reinstated. Having Spectre status reinstated does not grant Shepard any additional material benefits, as the Commander retains the Unity special ability whether this occurs or not. It does, however, change dialogue in several missions, and Shepard can naturally use their reinstated status to resolve issues that otherwise would've required a different path.

Shepard's Spectre status is either upheld or reinstated by the Council. This allows access to the Spectre outpost in the Citadel Embassies, which includes an intel terminal, a requisitions terminal, a comm terminal, and a shooting range to test weapons.