For a complete list of identified starships in the Mass Effect universe, see Starships/List.

Larger warships are classified in one of four weights:

Frigates are light escort and scouting vessels. They often have extensive GARDIAN systems to provide anti-fighter screening for capital ships, and carry a squad of marines for security and groundside duty. Unlike larger vessels, frigates are able to land on planets.

The most important role filled by frigates is reconnaissance. Sensors, unlike ships and communications employing the mass effect, are limited to the speed of light. Subsequently, a stationary observer can only detect a vessel one light-year away when its light arrives at the observer's location, one year after leaving said vessel.

Because faster-than-light attackers always arrive before defenders can detect them with luminal sensors, attackers can always surprise defenders. For defense, fleets surround themselves with spheres of scouting frigates scanning for enemy ships and transmitting warnings to the main body.

In fleet combat, frigates are organized into "wolf pack" flotillas of four to six. Wolf packs speed through enemy formations, hunting enemy vessels whose kinetic barriers have been taken down by fighter-launched disruptor torpedoes. The wolf pack circle-strafes vulnerable targets, using their superior speed and maneuverability to evade return fire.

Cruisers are middle-weight combatants, faster than dreadnoughts, and more heavily-armed than frigates. Cruisers are the standard patrol unit, and often lead frigate flotillas. Cruisers cannot land on medium or high-gravity worlds, but do possess the ability to land on low-gravity planets.

Cruiser-weight starships are the standard combat unit encountered away from large naval bases, the "poor bloody infantry" of most fleets. Nimble scouting frigates have neither the punch nor the stamina to stand up to serious combat, and the mighty dreadnoughts are a strategic resource, carefully hoarded and committed to the most critical battles.

Cruisers perform routine independent "show the flag" patrols in settled systems and lead flotillas of frigates in small engagements, such as pirate suppression campaigns. In major fleet engagements, cruiser squadrons support the dreadnought battle line by screening their flanks against enemies attempting to maneuver for a main gun "bow shot" from their vulnerable broadsides.

Carriers are dreadnought-sized vessels that carry a large number of fighters. All races provide their fleets with organic fighter support. Cruisers fit a handful in the space between the interior pressure hulls and exterior armor. Dreadnoughts have a hangar deck within the hull. Humans – who had only recently "graduated" from surface to space combat – were the first to build ships wielding fighters as the main armament.

It is possible to recover and rearm fighters during combat, though most carriers seal the flight deck and try to stay out of the way. The flight deck is essentially a corridor through the armor and into the heart of the vessel. A single well-placed torpedo is enough to gut a carrier.

Dreadnoughts are kilometer-long capital ships mounting heavy, long-range firepower. They are only deployed for the most vital missions. A dreadnought's power lies in the length of its main gun. Dreadnoughts range from 800 meters to one kilometer long, with a main gun of commensurate length. An 800-meter mass accelerator is capable of accelerating one twenty-kilogram slug to a velocity of 4025 km/s (1.3% the speed of light) every two seconds. Each slug has the kinetic energy of about 38 kilotons of TNT, about two and a half times the energy released by the fission weapon that destroyed Hiroshima.

The Treaty of Farixen stipulates the amount of dreadnoughts a navy may own, with the turian peacekeeping fleet being allowed the most. As of 2183, the turians had 37 dreadnoughts, the asari had 21, the salarians had 16, and the Alliance had 6 with another under construction. As of 2185, the dreadnought count was 39 turian, 20 asari, 16 salarian, and 8 human. By 2186, humans construct a ninth dreadnought, and the volus have built a single dreadnought of their own. The geth, unbound by the treaty, possess almost as many dreadnoughts as the turians. In preparation for the retaking of their homeworld, the quarians fitted their Liveships with dreadnought cannons, effectively making them dreadnought-class vessels though with much weaker armor. The batarians are stated to possess dreadnoughts, but the exact number is unknown.

Smaller vessels are exclusively used in a support role to the warships during combat:

Shuttles facilitate personnel transfer between large ships without the need to dock, or between a starship and the ground. Some models like the UT-47 Kodiak series are capable of independent FTL travel, and the UT-47A is equipped with both mass accelerator cannons and prototype stealth systems. 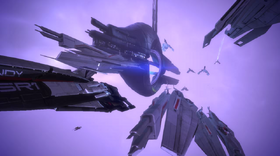 Retrieved from "https://masseffect.fandom.com/wiki/Starships?oldid=517771"
Community content is available under CC-BY-SA unless otherwise noted.