Admiral Steven Hackett is a top-ranking official of the Alliance Navy and commanding officer of the Fifth Fleet. He is based at Arcturus Station.

Hackett was born in Buenos Aires in 2134. When his mother died in 2146, he was placed in the Advanced Training Academy for Juveniles, where his affinity for science and leadership quickly became evident. Hackett enlisted in 2152, volunteering for high-risk missions to colonize space beyond the Sol Relay. He was commissioned as a second lieutenant in 2156 and participated in the First Contact War the following year. His rare ascent from enlisted man to admiral remains an Alliance legend.

On relatively equal political status with both Ambassador Udina and Captain Anderson, Hackett is one of the three officers who recommends Commander Shepard as the first human Spectre. During the mission to track down Saren Arterius, Hackett frequently contacts Shepard with key assignments, especially those vital to the Systems Alliance security, and is generally more accepting of Shepard's decisions than Udina.

When the Citadel is attacked by Sovereign, Hackett commands the Alliance vessels that reinforce the battered Citadel Fleet. Trusting in Shepard's "on the ground" judgement, Hackett leads the fleet to either defend or abandon the Destiny Ascension. Following the victory against Sovereign, Hackett is promoted to head of the Alliance military. 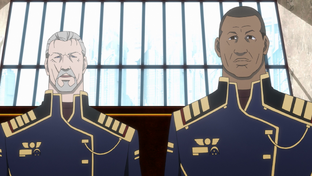 Admiral Hackett along with Admiral Anderson commends Delta Squad for its exceptional performance against the Blood Pack mercenaries on Fehl Prime in 2183. Lieutenant James Vega's actions during the mission strikes Hackett as similar to that of Commander Shepard. Hackett also delivers additional orders to the Delta Squad to protect valuable Alliance interests on Fehl Prime. When Vega protests, Hackett reminds him of the chain of command and assures him that Delta Squad's mission will be of vital importance to the Alliance. Hackett also cautions Vega about the dangers associated with trying to follow in Shepard's footsteps which usually involve the burden of excessive death and destruction.

After the Collector attack on the colony and the subsequent destruction of the Collector ship and the deaths of almost all the colonists, Hackett again commends Vega for his heroic and selfless actions, this time on the Citadel. He honors Vega with a medal for his actions and promotes him to Lieutenant Commander. Seeing Vega fighting so hard to be like Shepard, Hackett tells him that he may have the chance to work with the Commander one day as rumors of Shepard's death were premature.

Admiral Hackett resumes contact with Shepard in 2185, but not before becoming involved with planning a memorial for the Commander, who is presumed dead since the attack on the SSV Normandy in 2183. If Shepard repelled the Skyllian Blitz on Elysium, then on Hackett's orders, all proceeds from weddings held at Shepard Memorial Plaza on Elysium go to benefit the families of veterans and Alliance service members who were killed in action. If Shepard fought on Torfan, Hackett personally orders no arrests be made against those who tried to extinguish the Shepard Memorial Flame on Torfan. If Shepard survived the Thresher Maw attack on Akuze, then the Admiral will be scheduled to preside over the unveiling of the Shepard Memorial on that world in 2186.

After Liara T'Soni's confrontation with the Shadow Broker, if Shepard did not pursue a romance with Liara, she mentions that Hackett recovered Shepard's dog tags and passed them on to her so that she could return them to their rightful owner.

During the events of Arrival, Admiral Hackett asks Shepard to do him a personal favor and rescue his friend, Dr. Amanda Kenson, from a group of batarians who have captured her in batarian space. After Shepard returns to the Normandy he personally debriefs Shepard to find out exactly what happened during the mission. Regardless of how Shepard explains or justifies the decision to blow up the Alpha Relay, Hackett interrupts, stating he understands that it was "one hell of a thing" the Commander did. Subsequently, he warns Shepard to mentally prepare for the enraged batarians who will want answers and tells the Commander to be ready to return to Earth when the time comes. 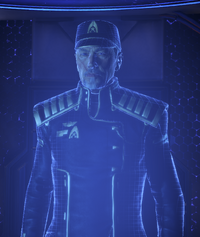 Immediately prior to the Reaper invasion in 2186, Hackett is alerted to the incoming Reaper fleet as several deep-space outposts go dark and begins mobilizing the Alliance Navy. Unfortunately, the Reapers proved too powerful, forcing Hackett to sacrifice the Second Fleet to allow the Third and Fifth to escape, and also resulting in him presiding over the worst military defeat in human history. He advises Shepard, reinstated into the Alliance military, to go to Mars, where Liara was researching what appeared to be a Prothean superweapon. Hackett would regularly appear via the quantum entanglement video communication device to debrief Shepard after a mission.

After the battle for Rannoch, Shepard can ask Hackett the reason for being put in charge of combating the Reapers. Hackett explains it's because Shepard has a loyal crew who followed the Commander against Sovereign and survived the Omega 4 Relay, centrally because they believed in Shepard.

Hackett expresses his distaste at the Illusive Man's aim to control the Reapers, asserting that he is "trying to tame a shark" and that the whole galaxy could end up paying for his misguided intent. He orders the Commander to kill him.

During the assault on Cronos station, Hackett mobilizes the Fifth Fleet against the Cerberus Fleet. He maintains contact with Shepard's team as they fight their way through the station.

Later, when Shepard commits the galaxy's combined forces to deploying the Crucible in Sol against the Reapers, he requests clearance to board the Commander's ship. There, he signals the various fleets to mobilize, giving his pre-battle address to all the soldiers participating in the upcoming fight. Afterwards, Shepard and Hackett meet in holo-conference with Anderson, who reports that the Reapers had moved the Citadel above Earth and had closed the Ward arms, making it impossible for the Crucible to dock. Hackett then details the plan for Sword fleet to engage the Reapers while Hammer strike teams aid the Earth resistance in reaching the conduit in London to teleport to the Citadel and unlock the Ward arms.

The assembled fleets launch the all-out assault on Earth while Hackett and a couple of warships hang back to protect the Crucible, escorting it to the Citadel sometime during the heat of the fighting. Arriving in Earth's orbit, Hackett detects that Shepard had made it to the Citadel and orders all allied ships to defend the Crucible. However, when the Crucible successfully docks with the Citadel, the device fails to work immediately and Hackett loses all contact with Shepard.

After Commander Shepard activates the Crucible during the battle for Earth, Hackett orders the fleets to retreat to a predesignated rendezvous point before the Crucible fires. If the Destroy ending was chosen, Hackett relates how the Reapers were defeated. Even though the galaxy is devastated and the mass relays are severely damaged, Hackett is confident they can rebuild, but regrets that so many people will not be able to witness the future that Shepard made possible.

“Never before have so many come together--from all quarters of the galaxy. But never before have we faced an enemy such as this. The Reapers will show us no mercy. We must give them no quarter. They will terrorize our populations. We must stand fast in the face of that terror. They will advance until our last city falls, but we will not fall. We will prevail. Each of us will be defined by our actions in the coming battle. Stand fast. Stand strong. Stand together. Hackett out.[2]”