I'm not sure how many people know about this, but a while back, Bioware sold "character keys" in their store for Tali and Garrus. Mostly, they just listed redundant and obvious information, but they also contained an interesting tidbit: Tali's height was listed as 1.72 meters, about 5'8, which is rather tall by human standards (Kahlee Sanders was noted to be an average woman at 5'5) and very tall by quarian standards (Golo, a quarian male, is stated to be only a few inches over 5 feet). It seems pretty trivia worthy. The problem is, the item was recently and suddenly yanked from the Bioware Store for unknown reasons, and I can't find any images of it with high enough resolution to accurately identify the height rating. It wouldn't be insane to assume one person bought it, right? Would anyone happen to possess one to cite?

I know what you're talking about! I have the same "Character Key". I bought it when I was filling out my "Tali Collection"... which is quite extensive, but entirely irrelevant to the topic at hand. I did notice that height listing as odd... but it kinda makes sense. If you look at Tali compared with Shepard, they're pretty much the same height (Shep is a bit taller). Regarding other quarians, there is no direct information from the games about their average height. I'm not sure who "Golo" is, but perhaps he is a short one? If you look at Tali compared with the other quarian admirals, they seem to be virtually the same height as well. All and all, it's interesting... but I don't think terribly relevant to Tali's character. Also interesting is that the "character key" lists Tali's primary weapon as "heavy pistols", when she is known for her shotguns. Rogen800 (talk) 04:10, June 1, 2014 (UTC)

Golo is a quarian villain and exile from Mass Effect: Ascension. He's stated to stand a foot shorter than Pel, who is said to be "a tall man, a few inches over six feet". I assume he's supposed to be an average quarian male, as quarians are noted as being shorter than humans in the codex, but him being short even by their standard is possible, yeah. Actually, almost everybody in-game is about the same height, except of course for krogan, turians, salarians, yahg, elcor, and hanar, so I wouldn't take that to mean much. This is particularly noticeable with Anderson, who's supposed to be 6'3 according to Mass Effect: Revelations, yet looks as tall as everyone else. If you have it, could you please upload a high quality picture somewhere, at least high quality enough so that we can actually make out the writing and see that it says 1.72 meters?

It's not really important, but I thought it was just an interesting little bit of information about the character that was worth listing. That's why it would go in the "trivia" section. That and because that character key is fairly obscure, especially since it was removed from the store. —The preceding unsigned comment was added by 68.6.150.161‎ (talk · contr).

Very interesting about "Golo". I've never read any of the Mass Effect novels, so I have a limited knowledge of their contents. Regarding height: Yes, quarians are shorter than humans, but the codex isn't very specific here. It could only be a matter of inches. Plus, there is a wide range of variation in human height. Some folks never grow beyond 5 feet while others approach 7 feet. Also, the average human height has increased over the centuries. Perhaps by the 2160's the average human height is a few inches taller than today. Even still, we don't know the average height for quarians. Maybe Golo is shorter than most. Then again, perhaps you are right in that Tali is a veritable "giantess" of a quarian. All things considered, there is just too much guess work to have a definitive "Trivia Fact" for the Trivia section, in my opinion. But, if others disagree then by all means - go for it! :)

Regarding the Character Key itself: I just scanned mine and uploaded the picture. Unfortunately, I don't have a very good scanner and it comes with a plastic covering over the words, so the quality is really bad. Here's the link anyway: 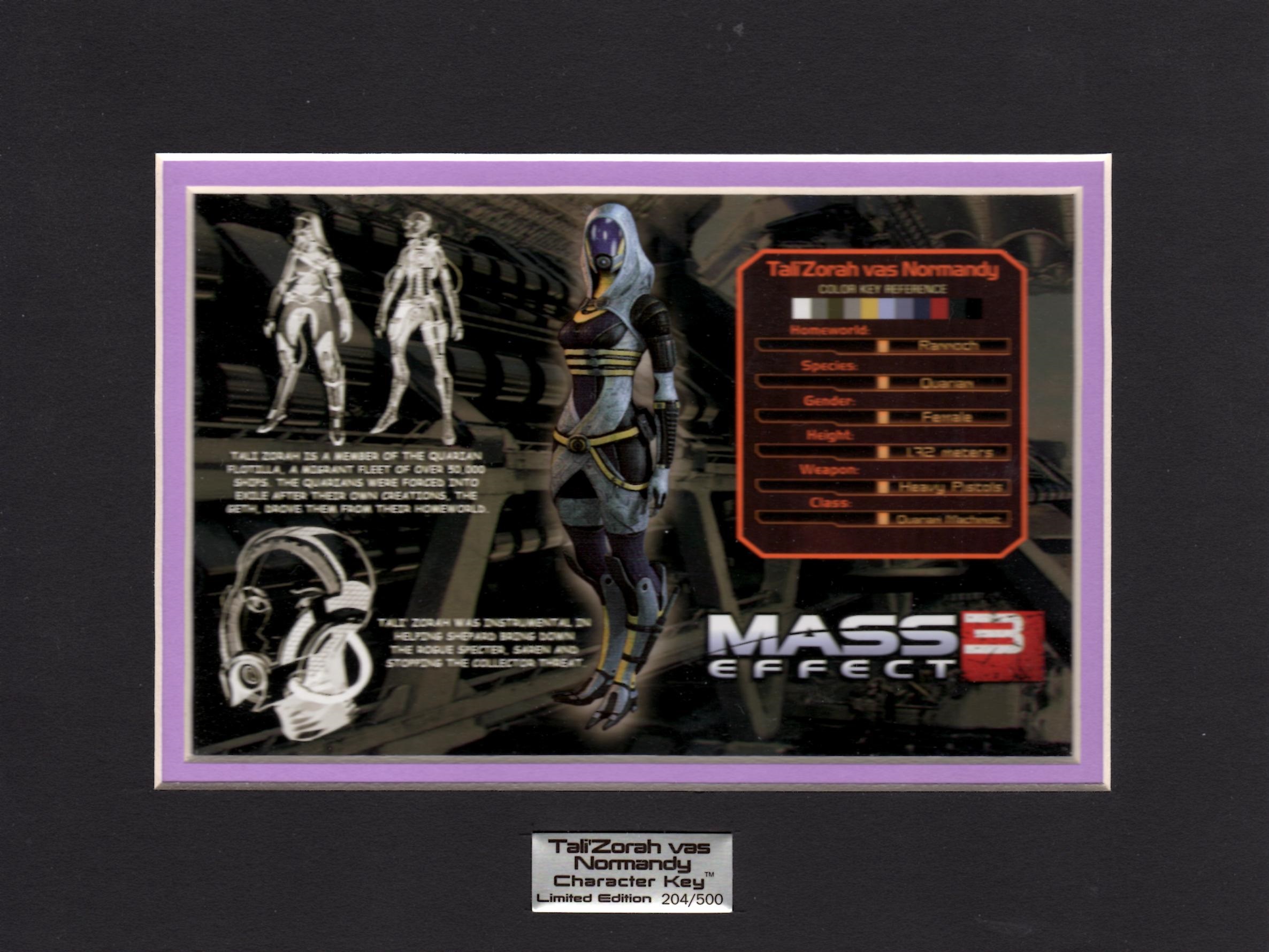 It's a pretty cool little trinket though! At the top-left, you can see a diagram of Tali's suit, both inside and out. At the bottom left you see an outline of her beautiful face behind the mask! :D

Why did they stop selling them? The Character Key is a limited edition item - only 500 were printed. After they were bought up - no more were printed. I guess I'm just one of the lucky few Tali fans who got a hold of one. Once I have access to a better scanner, I'll try to get a higher quality image up so that all can enjoy it! Rogen800 (talk) 17:05, June 1, 2014 (UTC)

Well, it specifically says that quarians are shorter on average. So the average quarian height is below the average human height. On the notion that humans may have grown, I highly doubt that. Not only because this idea is opposed by current science, but because in Mass Effect: Revelations, Kahlee Sanders is noted to be of average height for a human woman, and she's 5 feet 5 inches. That's about average for a woman today in countries like the USA, Australia, and Canada, suggesting that humans haven't grown much, if at all, and the male average is still 5'9-5'10. Plus, Dah at 6'3 is noted to be taller than almost everybody in her unit, so it's not like we have a bunch of giants suddenly wondering around. Either way, being a good bit taller than the average human female would definitely mark Tali as tall, especially for a quarian. But this is kinda irrelevant to the edit at hand... I just like talking about fictional characters' heights for some reason.
Thank you for the image! It's a little blurry, but you can at least see that it clearly says "1.72 meters". —The preceding unsigned comment was added by 68.6.150.161‎ (talk · contr).

Fascinating! Again, I never read any of the novels, so this is all new information for me. I appreciate the information - the more I can learn about Tali and her people, the better! Given this, it would definitely seem that Tali is quite tall compared with her "Fleet brethren". It would also seem to suggest that quarians have similar genetic diversity regarding height like humans. Then again, quarians are basically the "Dextro edition" of humanity anyway! :)
Yeah, the image is quite blurry, but it's the best I can do at the moment. At least you can read the words and see the splendor that is Tali in the center! :D Rogen800 (talk) 19:01, June 1, 2014 (UTC)

data gathered from tangible official merchandise are always subordinate to the games, novels, comics, website blurbs, and other tie-in lore materials. they're still legitimate to a degree, and thus are still valid trivia material. discrepancies, however, like the glaringly obvious height differences, should be noted.

of course, we can't declare the characters' heights to be "canon" with these self-evident inconsistencies. but if they came from official merch, they're still acceptable as trivia items and only as trivia items. T̴̴͕̲̞̳̖̼̱͒͛̎͒ͫ̃ͧeͩ̈̽̈҉͓̝̰̼̦̫̤̀͠m̫̪̪̯̻͎̫̅̇̓̇͌̚p̸̙̝̓̓͌ͨ͆ͣͥ̂̕o͒̽͐̽͏̞̬̻͕͔͕͚̰͍͠͞ṙ̢̞͚͈̹̰ͨ̓ͭ̈́̌ạ̢̧̪̹̺̺̣̹̲͂͆̏ͪͨ͒ͭř̹͈͜͠y̷͍̻̜̹̼̾̽̈́e̵̹̼̟̦͚͐̈́͌͘d͉̲̣̻͉̱͗̅ḭ̷̻̆͋̆̓̔͝t̨͍̦̫̗͂̅̍̋̆ͩ͝ộ̫̟̬̳̝̲̾ͫ̒̿ͮ̑̚rͯ̎ͨͭ̄̿̽͛҉̠̫̱̠̘̘̲́ͅ7̩̻ͤͩͨ͝͡8̜̣̙͇̻ͨ͛͛̆͒̆̽̒͐͜͡ ͥ̍̉̃̇ͥ̓ͨ͏̕҉̥̹͓̗̤̠̖̤ (talk) 10:52, October 6, 2015 (UTC)

The image currently in use, while photo quality wise is good, image wise, it doesn't work as the shotgun is very distracting and hides a lot of the subject in question. Also, Tali's appearance has changed quite a bit since ME1, so I have to question the use of a screengrab from ME1 for a character that's been in all the main games. What other character profile images can we use for the article? --Soren7550 (talk) 02:32, May 12, 2015 (UTC)

The aftermath of ShepardxTali is described in the Destroy and Synthesis endings, but there's no mention of what happens in the Control ending. Can we add that? Blademaster Banryu (talk) 14:45, May 8, 2016 (UTC)

Retrieved from "https://masseffect.fandom.com/wiki/Talk:Tali%27Zorah_nar_Rayya?oldid=465020"
Community content is available under CC-BY-SA unless otherwise noted.