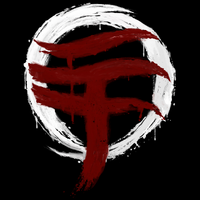 The Talons are a mercenary organization based on Omega. They are highly organized, setting them apart from other gangs like the Blood Pack, but just as dishonorable. Its members sport prominent red facepaint.

Prior to the plague of 2185, the Talons were an obscure group with negligible influence, but the devastation of the plague combined with Commander Shepard's actions against mercenaries on the station resulted in a power vacuum that the Talons rapidly filled.

The Cerberus operative Pel used a small warehouse owned by the Talons to set up his base of operations on Omega in 2183. The Talons were the best option for freelancers looking to gain footholds on the station. Although they were known for charging high rates for rent and protection, they left their customers alone, never asking too many questions. The Talons are strong enough at the time to keep the streets of the predominately turian district they control stable and prevent riots.

In early 2186, the Talons are a small but steadily growing turian gang established on Omega that run a red sand smuggling operation. After they stop paying Aria T'Loak her cut of their profits, Aria sends a team consisting of her daughter, Liselle, and trusted henchmen Paul Grayson and Sanak, to capture a red sand shipment from a Talons warehouse. The raid goes smoothly, with all of the Talon mercenaries killed without any casualties on Aria's henchmen.

Later, some Talon representatives meet with Aria in response to the attack and attempt a parley to their advantage. However, Aria is able to keep the ball in her court and negotiate a better deal to her advantage, getting a larger cut. Despite being furious, the Talons accept as they know they would not be able to win against Aria's organization. 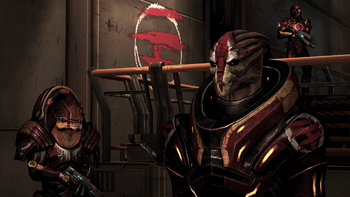 After Omega's fall to Cerberus and Aria T'Loak's exile, the Talons continued a resistance effort against the occupiers, freeing detained civilians and other hit-and-run ops against Cerberus occupiers.

Under Nyreen Kandros's direction, the Talons are transformed from a small-time gang into an organized force whose members fought for a higher purpose: to protect the people of Omega. The Talons' numbers also swelled as other resistance fighters and smaller gangs joined them.

Prior to her rise to leadership, the Talons were managed by a man named Derius, who simply ran the gang for profit. Nyreen succeeded him sometime in 2186, the change in leadership unnoticed even by Aria.

During Aria's offensive to retake Omega, she persuaded Nyreen to use the Talons to reinforce her own troops. As a consequence, Talons came to form a significant portion of Aria's forces during the assault. Nyreen dies during the final battle to reclaim the station, replaced by an unnamed leader who hopes to uphold her legacy.

Retrieved from "https://masseffect.fandom.com/wiki/Talons?oldid=516155"
Community content is available under CC-BY-SA unless otherwise noted.