When in a kett camp, SAM will alert Pathfinder Ryder that there is a message console that is hackable. After hacking the console, the mission starts.

Note: Device naming for the items to be hacked is inconsistent. The mission objectives say these items are Terminals but the actual names of the items that are hacked are Consoles. 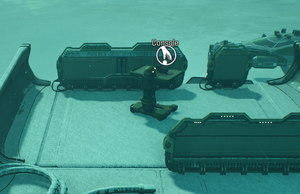 Three Consoles have to be hacked to give SAM enough data to crack the passcode.

You have to find two additional Consoles and hack them. The Consoles are spread randomly among the kett camps and sites where kett scavenge. Each Console will be marked with

. If a camp doesn't have a Console, the camp might have one the next time Ryder visits. If a camp has a Console, SAM (or a squadmate) will comment on the presence of the Console.

Note: It's possible to force a spawn of a Console. Get out of the ND1 Nomad (or risk a corrupt save), make a manual save, and patiently continue to load that save until there is a Console.

The message order and the message itself on each hackable console are always the same. It doesn't matter where Ryder finds each console.

After the third Console is hacked, SAM is able to crack the passcode and calculate a navpoint

Go to the navpoint at the Northern Holding Site. Note: If Ryder hasn't completed Stage a Rescue, this mission will be added as Ryder approaches. Opening the cages will allow the angara to help with the upcoming kett ambush.

There is a datapad on the ground next to one of the cages.

Inside the building is a terminal with multiple entries.

Use The Passcode On The Door Edit

Head inside the building and use console next to the locked door. Using the passcode starts the ambush.

Several dropships will fly in and drop off the kett ambush. Anointed, Destined, and Chosen will arrive. Defeat the kett.

After the ambush is defeated, head back into the building and use the console next to the locked door again. This will open the door.

Shut Down The Control Console Edit

Head into the newly opened room and use the console. Several kett airships are grounded, and the Resistance has less kett forces in the air to deal with (says SAM). However, there is no noticeable difference in the frequency of kett air drops.

Retrieved from "https://masseffect.fandom.com/wiki/Task:_Clearing_the_Air?oldid=515224"
Community content is available under CC-BY-SA unless otherwise noted.