You discovered a weapons cache on Kadara. Continue to scan caches to determine their destinations.

Amongst the outlaw camps, Pathfinder Ryder will find the first weapons cache when SAM alerts Ryder to it. Scan the cache to start the mission. 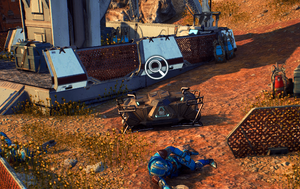 You have to find two additional caches. The caches are spread randomly among the camps. Each cache will be marked with

. If a camp doesn't have a cache, the camp might have one the next time Ryder visits. If a camp has a cache, SAM (or a squadmate) will comment on the presence of the cache.

When Ryder has found three caches, the mission will update to the next objective.

Travel To The Navpoint[]

Travel to the navpoint

in Spirits' Ledge. Ryder arrives in the middle of a fight between the Collective and the Outlaws. Use the datapad at the navpoint.

Someone has been hoarding weapons for an attack on Prodromos.

Search For The Message Source[]

The message source is from a nearby building. Outlaws are there. SAM detects explosives nearby.

There is an Adaptive Remnant Core Device to scan for +100

underneath one of the platforms.

The Outlaws have two Hydras and reinforcements will arrive via airship.

Prevent The Shuttle From Leaving Kadara[]

next to the shuttle. This triggers the rewards for the mission.