You've discovered a datapad that recounted a scavenger's run-in with a gang run by "Little Mouse". Find more datapads to learn more about this gang and its activities. 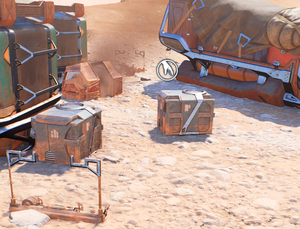 Pathfinder Ryder receives this task after stumbling upon a datapad in a scavenger camp on Elaaden that details a gang leader named "Little Mouse".

Note: If the container at the ridge in Languish is opened before the assignment is initiated, its rewards (AVP, EXP and viability points) will be given, and the task won't show up on the journal until you find the first datapad.

In this case, once all datapads are found, the assignment will then be marked as complete without additional rewards being provided.

Ryder has to find five more datapads. The datapads are spread randomly among the camps and crashed shuttles. Each datapad will be marked with

. If a camp doesn't have a datapad, the camp might have one the next time Ryder visits.

Once Ryder has found the remaining five datapads, an additional navpoint

in the Languish region is added. This is very close to the Memory Trigger for Ryder Family Secrets which is north-northwest of New Tuchanka.

Note: As mentioned above, if the container at the ridge in Languish was opened before the assignment was initiated, the assignment will be completed once all datapads are found. No additional rewards will be provided, however, as opening said container prior to the assignment's start triggered the provision of the task's rewards.

Track Down The Stash Edit

Head to the navpoint. At the navpoint, Ryder will come under fire from Outlaws. Defeat them. After the battle, Ryder finds the corpse of the scavenger who wrote the datapads and a container with the stash.

Open the container to finish the mission.

Retrieved from "https://masseffect.fandom.com/wiki/Task:_Little_Mouse?oldid=515183"
Community content is available under CC-BY-SA unless otherwise noted.