You found a survey job started by Initiative technician Eric Camber. He was apparently interrupted by kett, and may have died. Accurate surveys are simple, but critical. Completing his beacon run is a small thing, but will help make Eos more viable.

Interact with a Field Comm Terminal (marked with a

) on the ground in Four Giants (approximately halfway between Site 2: Resilience and the southeast monolith

). Also, the vehicle next to the field comm terminal when scanned awards +10 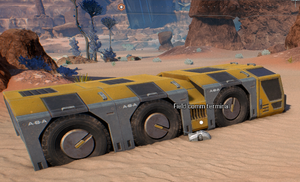 on the map and place the beacons.

has been established on Eos during A Better Beginning and the radiation has cleared.

The mission will complete after the fifth beacon has been placed.

Afterwards, you will receive an email from Eric Camber, indicating he is in fact alive.

Retrieved from "https://masseffect.fandom.com/wiki/Task:_What_He_Would_Have_Wanted?oldid=515219"
Community content is available under CC-BY-SA unless otherwise noted.