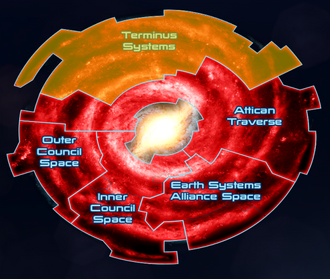 The Terminus Systems are located on the far side of the Attican Traverse, beyond the space administered by the Citadel Council or claimed by the human Systems Alliance. These systems are populated by a loose affiliation of minor species, united only in their refusal to acknowledge the political authority of the Council or adhere to the Citadel Conventions.

Their independence comes at a price; the Terminus is fraught with conflict. War among the various species is common, as governments and dictators constantly rise and fall. The region is a haven for illegal activities, particularly piracy and the slave trade. The prevalence of batarian criminal gangs has led to the batarian language becoming a "lingua franca" in the Terminus. The Terminus Systems have no government, but the Omega station serves as a trade capital.

At least once a year, a fleet from the Terminus invades the nearby Attican Traverse. These attacks are typically small raids against poorly-defended colonies. The Council rarely retaliates, as sending patrols into the Terminus Systems could unify the disparate species against their common foe, triggering a long and costly war.

Despite the dangers, Citadel races have not been deterred from traveling through and even extensively colonizing the Terminus Systems themselves. Humans, turians, salarians, elcor, asari, and volus each have a sizable colonial presence there. Since the Citadel Council's authority is nonexistent, these colonies are often fully independent from any interplanetary government. The Terminus Systems also encompass the homeworlds of the quarians and the vorcha.

Before the Alliance expanded into the Voyager Cluster, the turians mapped the Terminus Systems in great detail using an interferometric array, with one end in the Attican Beta cluster and the other at the planet Gromar.

Locations in the Terminus Systems