Terra Nova was one of the Class-1 colonization prospects discovered by the first wave of Alliance surveys in 2150. It was the second human extrasolar colony, and the first beyond the Charon Mass Relay. It currently has the highest population of any Alliance colony.

Though banded by a harsh equatorial desert, areas closer to the poles are temperate. The pace of development was modest until extensive deposits of platinum were discovered in the 2170s. This rare metal, required in the clean-burning hydrogen fuel cells that power private vehicles, attracted a "platinum rush" of immigrants and investment from throughout Alliance space. In the past twelve years, Terra Nova has seen a 30% rise in population, and growth does not appear to be slowing.

Terra Nova was one of the Class-1 colonization prospects discovered by the first wave of Alliance surveys in 2150. It was the second human extrasolar colony, and the first beyond the Charon mass relay. It once boasted the highest population of any formally endorsed Alliance colony, but in recent years threats of batarian attack caused many to emigrate. The name "Exodus Cluster" became all too apt.

The Reapers landed on Terra Nova after a brief battle with the Alliance's Sixth Fleet. Aware that it would lose, the fleet retreated in hopes of meeting with allies and retaking the planet. Intelligence indicates that the Reaper force here is light, and debate rages over whether to try to liberate the planet, or if such an effort would prove futile if the Reapers sent reinforcements. 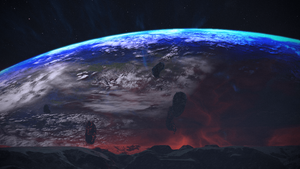 Terra Nova has no natural satellites; X57 is planned as an artificial one.

Given the orbits of planets Loki and Tyr, the sun Asgard ought to be a twin to Sol and Terra Nova would be about 1.3 AU from it. If Earth were at 1.3 AU from its sun, by the inverse square law it would get 59% of its heat.

Borr at six times Jupiter's mass orbits at 1.7 times Terra Nova's orbit; but since this would be 2.21 AU, even at its closest Borr does not provide enough radiation or raise enough tides to heat Terra Nova anymore. Earlier in the system's history its effects would have been more extreme.

Terra Nova's equatorial desert must have a Bond albedo comparable to that of a water ocean or lower (0.035); further, its atmosphere must hold a high proportion of greenhouse gasses other than water.

Terra Nova is a very dark, basaltic planet with few reflective clouds and high proportions of methane and carbon dioxide in its atmosphere. As the desert's edge greens, the planet's albedo will rise, and its temperature will fall accordingly.