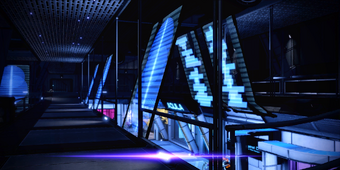 Thane has revealed that his estranged son, Kolyat, has taken a contract on the Citadel as a hitman. Thane needs to find his son and stop him from making the same mistakes Thane made so long ago.

Kelly will say that Thane wishes to speak to Shepard. Thane has been contemplating his mortality and has checked in on his only remaining family member, his son, Kolyat. Kolyat apparently wants to practice the same profession as his father, which greatly troubles Thane. He asks Shepard to go to the Citadel to stop his son from becoming like his father.

Like Samara's loyalty mission, this is a "no combat" mission, and as such provides substantial experience, cash, and other rewards with no risk - thus it's recommended that you undertake this mission as soon as convenient after you receive it. Note that, Garrus's loyalty mission is also on the Citadel and also requires talking to Captain Bailey, so showing up with Thane and Garrus in your squad can make for some efficiencies.

Go to the Citadel and select Thane as one of the squad members.

Finding out the target Edit

Talk to Captain Bailey at C-Sec and ask about Thane's son. Bailey checks and finds that a local petty criminal named Mouse was seen talking to a drell. Mouse was a poor kid who grew up on the Citadel. He is also selling VIs of Shepard. Mouse can be found on Level 28 near Rodam Expeditions. Mouse recognizes Thane. About a decade ago, Thane used Mouse when he was a child to gather information on his assassination targets. Shepard can convince Mouse to say who hired Thane's son by:

Mouse will reveal that Elias Kelham, a small-time criminal who got big after the geth attack wiped out many crime bosses, hired Kolyat for a hit.

Note that in order to find out about the Shepard VIs, Shepard needs to ask about them before asking about Kelham. Shepard can ask for a copy of the VI, for Mouse to stop selling them, or for a cut of the profits. None of the choices has any effect on the game and the player never gets to see the Shepard VI. 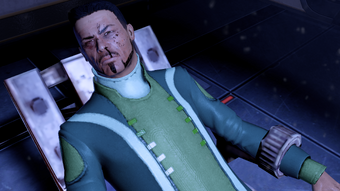 Go back to Captain Bailey to ask about finding Kolyat. The situation is awkward for the C-Sec captain, because he and Kelham have an arrangement—Kelham bribes Bailey and he looks the other way. Nevertheless, Bailey is willing to help Shepard by arresting Kelham and providing an opportunity for Shepard and Thane to interrogate him. You must now try to make Kelham confess before his lawyer arrives.

Eventually Kelham will confess to ordering the hit on Joram Talid, a turian running for local office, whose platform is based on anti-human sentiments.

Bailey arranges for transportation to where Talid is. Thane tells Shepard to shadow Talid from above from the catwalks. Shepard should go to the right to find a datapad that will provide the heavy pistol upgrade. Then Shepard can update Thane on Talid's location. The majority of the mission will consist of moving close to Talid, updating Thane on Talid's location, and then waiting for Talid to move again. 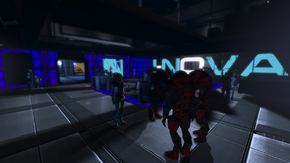 Talid is easily spottable because of his krogan bodyguard. If Shepard is too far away, Thane will say he's losing sight of Talid. There is also plenty of time to regain sight of Talid if Shepard loses him. If Shepard does not update Thane on Talid's location, there will be a cut scene in which Kolyat murders Talid and Thane laments that his son's path was inevitable. The mission will be considered complete, but Thane will not be loyal.

After the fourth update, Talid waits outside a store while the krogan bodyguard goes inside. Then the two will run into a nightclub. Talid then meets with a group of krogan.

Shepard will then encounter a stock boy, Jim Reynolds, up in the catwalks. Shepard can use a Renegade interrupt, Charm, or Intimidate, to get past Jim. The Renegade interrupt is 5 Renegade points, the Charm option is 5 Paragon points, and the Intimidate option is 5 Renegade points. If Shepard does not choose one of these options, the player will be given more Renegade interrupts, Charms, and Intimidates, until finally Shepard knocks him out for zero morality points. Sometimes, the encounter with the stock boy will not trigger, but Shepard can proceed onwards and complete the mission. The catwalk part of the mission is over.

Tip: If you're replaying the mission and would like to complete it as quickly as possible, then just after the krogan bodyguard goes in the store give Thane one last update on Talid's position and then you can proceed as quickly as possible to the stock boy and thence through the door to the final encounter. By moving quickly you will trigger the final cutscene before Thane notices you're too far from the target.

Kolyat is waiting for Talid. He wounds the bodyguard and pursues Talid to his apartment. Shepard and Thane chase after Kolyat. At Talid's apartment, Kolyat is ready to execute Talid when Shepard, Thane, Bailey, and a C-Sec officer arrive. Shepard can use a Paragon interrupt to distract Kolyat and disarm him. If not, Shepard has the option of wounding Kolyat or killing Talid.

Kolyat is angry at Thane for only just now caring about him. Shepard and Bailey then give Thane and Kolyat the opportunity to talk more in private. Back at the C-Sec station, Bailey tells Shepard he's been looking into the archives and found a series of murders ten years back where the primary suspect was a drell. Shepard tells Bailey not to pursue it.

Shepard, Thane, and Bailey then talk about what to do with Kolyat since he attempted committing murder. Charm for 5 Paragon points will convince Bailey to have Kolyat do community service. Intimidate for 5 Renegade points will cause Bailey to privately employ Kolyat. Doing neither sends Kolyat to prison.

Captain Bailey will send Shepard the following message after the mission only if Thane and Kolyat got to talk with each other. It's titled "Update on the kid".

The message will be the same regardless of Bailey's decision on Kolyat.

Thane stops Kolyat: Thane has dealt with his son. He should be clear of any further distractions from the mission.

Kolyat kills Talid: Thane's failure to find his son leaves him distracted. He may not be at peak efficiency.

Retrieved from "https://masseffect.fandom.com/wiki/Thane:_Sins_of_the_Father?oldid=478771"
Community content is available under CC-BY-SA unless otherwise noted.