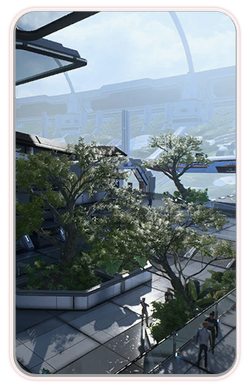 Dr. Aridana has attempted to contact you. Speak to her at the Nexus tech labs.

May be acquired via a message received after reviving Eos or by finding Dr. Aridana in person in the Tech Lab.

This mission has a few jumps. You must have Kadara Port and the ability to travel to the Varren's Scalp region to resolve the mission fully.

Note: This mission will fail if the objectives involving the SAM Node are not completed before returning to Khi Tasira during Meridian: The Way Home.

Dr. Aridana asks for your help looking into strange transmission patterns in the Scourge. She giveS Ryder an OSD which can be inserted directly into SAM Node who will aid in resolving some calculations.

Run the equations at SAM Node on Ark Hyperion[] 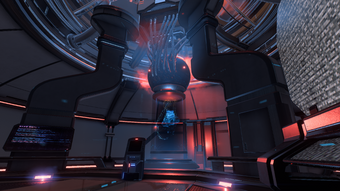 Head to the Hyperion Habitation Deck and proceed to the SAM Node. After inserting the data drive into SAM Node, an alarm will sound, the door locks, and SAM announces that malicious code has been detected on the drive.

You will have to reset three nearby panels and reinitialize the main console in order to help SAM recover. SAM helpfully displays a Pathfinder holo doing the resets at relevant locations.

Follow the reset order laid out by the holo: small southern panel, long northern panel, and the southwest display attached to a column. If you screwed up, you'll have to start it again. If you get it right, a successful reset clears the affected panel's display. Once all three are clear, you can now access SAM's main console to restore normal operations and speak with him.

Once stabilized, SAM says that the files contained a virus designed to sever the connection between SAM and Ryder, and also render SAM helpless.

Dr. Aridana denies any knowledge of the virus' origin. Professor Herik suggests that it may have been an anti-AI activist that sabotaged the files. The group suggests you check the rest of the Nexus for anti-AI activity.

Look for anti-AI activity on the Nexus[] 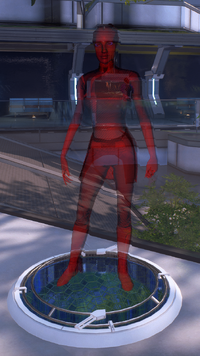 Head out to the nearest Avina VI on the first floor, which is the VI that you first meet when docking the Hyperion on the Nexus for the first time. Avina will show erratic behavior. Start a conversation with Avina and the avatar will be taken over. Instead of a VI, Ryder will be talking to a member of the secret anti-AI hacker enclave that made the virus. In the conversation SAM recommends Ryder lie and pretend that the virus was successful in order to gain more information from the hackers.

ON HOLD: Wait for an email from Knight[]

Note: The mission will go on hold at this point until you advance the main mission. Once Ryder has landed on Kadara Port the mission automatically updates with the next objective.

Look for an email from Knight[]

Read the email from Knight titled [Error 982: Carrier signal interrupted!] - Invitation, which invites you to a meeting at a specified area in the Varren's Scalp region: halfway between Kadara Port and the Haarfel Forward Station.

Acknowledge the email to receive the navpoint

and get the next objective.

Go to the hackers' sanctuary on Kadara[]

Head to navpoint location. You will meet "Knight" and her reasons for her hate towards all AI, namely her prior involvement in Project Overlord.

You will now be presented with two methods to discover Knight's plan. There are four optional objectives that can show up but only three of them at any time are available depending upon choices you made. If you want to fight, the non-fight option's second optional objective won't show up and vice versa.

Warning: It is very important to not use the scanner in the hacker sanctuary on Kadara unless you want the fight and understands the consequences. Use it one time and the hackers will see this as a glitch. On the second time, the hackers become hostile and you will have to eliminate all of the hostiles. The hackers going hostile also cause Knight to die at the end of the mission no matter what you do (including helping Alain).

Optional: Scan the sanctuary for clues[]

Use the scanner to search the building. On the second scan, the hackers will go hostile.

Optional: Build a curative device for Alain at a Research Center[]

Talk to Knight's son Alain. He will tell Ryder a little bit about his history but refuse to divulge any information about his mother's plans.

Talk to SAM and head to any Research Center to develop the Cybernetic Device to help him. The cybernetic device requires 6 Aluminum and 2 Iridium to make.

After the battle, Ryder will be required to scan three items before being able to use Knight's personal terminal. Scan the EMP Device, Schematics, and Nexus Network Map for +10

Deliver the device to Alain; he will thank you. Ask Alain about Knight's plans and you'll learn that her project has a codename: Mercury. Ryder can use this information to hack her personal terminal.

Investigate the sanctuary, but do not use the scanner, as this will cause the other personnel at the base to become hostile later on. The Research Data (RD) can't be obtained with this method.

Head to the computer terminal and Ryder will discover that Knight intends to plant EMP devices on the Nexus in order to destroy its quantum computers, which will prevent the future creation of any AI, though it will cripple the station's operations in the process.

Note: If you haven't built the curative device and delivered the device to Alain, using Knight's personal terminal will cause that optional mission to fail.

Note: If the scanner was used at any point prior to this (more than once), everyone in the base except for Alain will now become hostile. While it's still possible to get the best outcome to the mission by immediately leaving without killing anyone, in practice this is difficult, as on the easier difficulty settings Ryder's squadmates will likely end up killing at least one of the personnel even if you don't fire a single shot. Therefore, place your squadmates outside before you access the computer. On Hardcore or Insanity difficulties, the number of enemies all but guarantees that Ryder will be killed if you try to leave without dealing with them all. One possible solution is to command squadmates to hold position out of enemy sight, then run to the ND1 Nomad and extract.

A number of datapads can be found around the sanctuary.

Head to the Nexus via the Tempest, talk with Tiran Kandros and deactivate the devices.

Note: If you helped Alain, Kandros will inform Ryder that one of the devices has already gone off in the Hydroponic Gardens. This doesn't actually matter - the mission proceeds identically in either case. This is not time based - getting to the Nexus faster makes no difference.

The first EMP device can be found hidden behind/next to the planter near the entrance to The Vortex in the Common Area.

The second EMP device is hidden under the desk in the monitoring room of the Operations Area.

The third EMP device is behind a row of computer consoles and next to the railing on the highest level of the Operations Area.

After deactivating all three devices, confront Knight right outside the Tech Lab in the Nexus's dock zone (second floor).

How you deal with Knight depends on what happened back at her base:

If you let Knight live, Alain can be found on the Nexus in the Lab (Docking Bay area) after the mission and you can ask him about his mother.