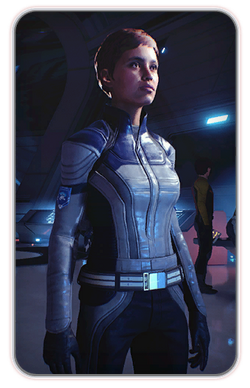 A strange signal caused the Tempest to auto-respond. Search the system for the source.

This mission is triggered when the Tempest enters the Pytheas system.

Dr. Suvi Anwar alerts Pathfinder Ryder that something pinged the Tempest, and the Tempest auto-responded.

Scanning the Pytheas system reveals a ZK Resource Tracker. Suvi indicates it must have been designed by someone who knows the tech "inside and out."

When the Tempest arrives at the location, the satellite explodes, and Ryder receives +29 AVP

Addison briefs Ryder on the issue. Among other things, the satellites can open backdoors into the Initiative's system. The tech is designed by Dr. Zoe Jean Kennedy who disappeared along with the exiles. Addison suggests searching systems where Initiative outposts have been established or placing new ones to draw these persons out. Her concerns are Kennedy, the tech Kennedy created, and then the exiles lives - in that order.

Find a ZK Tracker in the Pytheas System Edit

This objective is added and automatically completes after speaking with Addison on the vidcon. There is no need to return to the Pytheas system.

Find a ZK Tracker in the Nol System Edit

After establishing an outpost on Voeld, a ZK Resource Tracker satellite can be discovered in the Nol system.

Suvi gets closer to tracking the sources of origin for the satellites.

Find the origin of the signal in the Nalesh System Edit

Following the tracking signal to the Nalesh system leads to a ZK Tracker Signal Shuttle. Suvi detects it's just a relay, but manages to intercept the feed. Harlan Wells notices they have been discovered. The Pathfinder manages to get a conversation going, discovering that Kennedy is pregnant, but the shuttle explodes before Suvi can track the origin of the transmission. Scanning the debris gives +50

Ryder wants some answers from Addison. Addison is forthcoming. Addison and Zoe Jean Kennedy know each other from their university days, and it was Kennedy who talked Addison into the Andromeda Initiative. Addison is not happy with what Kennedy did, but that fact has to be accepted to make the best out of the situation. Kennedy has to be found.

Find a ZK Tracker in the Govorkam System Edit

Provided an outpost is already established on Kadara, a ZK Tracker Satellite signal is detected in the Govorkam system. Suvi detects that something is different with this satellite. There is an angaran signal on the tracker. Listen to the last message on the tracker. It's clear that the Roekaar are tracking Kennedy.

ON HOLD: Place an outpost to Attract a ZK Tracker satellite Edit

The mission now goes on hold until you establish another outpost. Placing at least one additional outpost would remove the "on hold" status of the mission, at least temporarily, and summons another tracker satellite in the corresponding star system of said outpost.

All outposts need to be established in order to summon all of the ZK Tracker Satellites, which are required to track Dr. Kennedy.

Note: If, however, Settling Elaaden fails because you decide to reject Nakmor Morda's overture at the conclusion of Search for the Stolen Remnant Drive Core, this mission will still proceed.

Find a ZK Tracker in the Zaubray System Edit

Provided an outpost is already established on Elaaden, a ZK Tracker Satellite signal is detected in the Zaubray system. Suvi comments that this is the final signal needed and that there are indications that the kett are on the track too. The signal leads to the planet Voeld, where there are plenty of kett and Roekaar.

Land on Voeld and head to Techiix. From Techiix, head to the northeastern most area to the navpoint

. When Ryder gets close to the location, this objective completes. The shuttle is under attack.

Both kett and Roekaar are attacking the shuttle. There are two computer consoles on either side of the shuttle that will activate the defense turrets. When the enemies are defeated, the shuttle takes off, and soon the sound of a newborn baby is heard over the comm.

After the battle, there is a large orange container that can be looted and an Adapted Initiative Core Tech that can be scanned for +100

Addison is satisfied with the resolution. Dr. Kennedy has agreed to share her findings with the Initiative. She somewhat mysteriously says there are other pregnant women out there other than kett and Roekaar.

Ryder is given the choice of where Dr. Kennedy and her family should live. This choice updates the Codex with The First Generation and the following text but has no other known consequences.

If the Nexus is chosen:

If Prodromos is chosen:

If you ask about the name, Kennedy will say that she has named her child David Edward, "after an old friend."

Retrieved from "https://masseffect.fandom.com/wiki/The_Little_Things_That_Matter?oldid=515365"
Community content is available under CC-BY-SA unless otherwise noted.