Mass Effect
The Thorian, also called Species 37, is an ancient sentient plant at least fifty thousand years old - its ability to hibernate for thousands of years makes its real age impossible to guess. The Thorian is a unique creature with mind-controlling and telepathic abilities, and a massive sensory network. It releases spores into the air that allow the Thorian to control those who inhale them, using pain to control their behaviour. These 'thralls' then tend to the Thorian and obey its will.

According to the VI at the ExoGeni Corporation Headquarters, the Thorian is essentially "a weave of tendrils" that covers much of the surface of Feros with some sensory tendrils kilometres long, though in places they are gathered into nerve bundles or neural nodes. Though it is intelligent, the Thorian only regards other sentient beings as potential thralls. It describes itself as "The Old Growth."

Commander Shepard first hears of the Thorian from Lizbeth Baynham, who tentatively suggests that it might be why the geth are attacking the colonists on Feros. Shepard can learn more from the ExoGeni VI; once freed from the Thorian, Shiala then tells Shepard its history.

According to Shiala, the Thorian existed on Feros long before the Protheans arrived. It would spend thousands of years in hibernation, then awake for "a few frantic centuries" of activity before resting again. When the Protheans arrived and began building the metropolis that would eventually cover Feros, the curious Thorian studied them, likely made several of them into its thralls, and even absorbed them after they died, allowing them to become a part of its expanding consciousness.

From the Protheans, the Thorian's mind gradually absorbed the knowledge that would form the Cipher. The Thorian survived the cataclysm that destroyed the Protheans, and continued to grow across Feros for the next fifty thousand years.

In the late 2170s, ExoGeni Corporation began settling Feros and established a colony in one of the ruined skyscrapers, not realising that the Thorian's lair was deep below it. The massive plant organism had awakened from its hibernation, and the presence of so many potential thralls so close was too tempting to resist. In 2183, a small survey team was exploring the ruins when they inadvertently entered the Thorian's lair and were infected with spores. ExoGeni realised what had happened, but instead of protecting their colonists they isolated the settlement to see what would happen and study the Thorian's massive sensory and mind-controlling potential.

As ExoGeni watched, it took less than a month for 80% of Zhu's Hope's inhabitants to become infected and begin performing tasks for the Thorian. The ExoGeni VI reports that via these spores, the Thorian issues mental commands to its thralls; if they resist, the thralls suffer intense pain until they are conditioned against any thoughts of rebellion. Though the initial conditioning is painful, the Thorian doesn't force the thralls to perform dangerous tasks or hurt themselves. The VI compares this behaviour to that of a craftsman who is careful not to damage his tools. The colonists at Zhu's Hope were therefore permitted to 'pantomime' a normal existence until the Thorian needed them, though some, like Ian Newstead, were strong enough to resist it for a time. The Thorian was careful to keep these few out of sight. 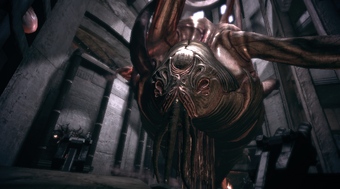 However, Saren Arterius had learned of the Thorian's existence and its connection to the Protheans. He traveled to Feros in secret with a contingent of geth and a powerful asari biotic, Shiala. He went to the Thorian and negotiated a trade, offering Shiala as a sacrifice. Shiala melded with the Thorian; sharing the Thorian's consciousness gave Shiala the Cipher, which Shiala then transferred to Saren's mind. However, Saren knew Commander Shepard was in pursuit and he could not risk Shepard gaining the Cipher. Saren ordered the geth to destroy the Thorian and all traces of the creature's existence.

The geth launched an assault against Zhu's Hope, but the colonists blocked the entrance to the Thorian's lair with the wrecked Borealis and, enthralled by the creature, began fighting to the death to defend it. News of the geth attack soon reached Shepard and the Normandy arrived on Feros to investigate.

At first the colonists at Zhu's Hope were grateful and relieved to see the squad - the Thorian saw Shepard as the perfect weapon to destroy the geth without running the risk of another betrayal. It instructed the salarian merchant Ledra to sell Shepard whatever weapons he had available, and made the other colonists urge Shepard to focus on fighting the geth. 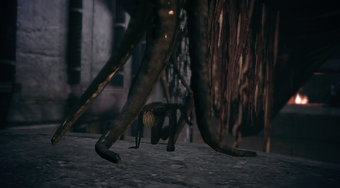 After Shepard went to the ExoGeni building, the Thorian's massive sensory network likely picked up what the Commander learned and the Thorian realized Shepard, like Saren, would probably try to kill it. The colonists turned on the squad and even tried attacking the Normandy. The Thorian forced the colonists to fight Shepard's team on their way back to the crashed freighter at Zhu's Hope. It made one last attempt to stop them with Fai Dan, but he rebelled against the Thorian's control and shot himself.

Once underground Shepard and the team found the Thorian's lair, which apparently smelled like rotting compost. Down a set of stairs the team was confronted with the Thorian itself: an enormous organic mass that looked nothing like a plant. In response to Shepard's approach, the Thorian produced a clone of Shiala to speak for it. Through the clone, the Thorian, referring to itself as the 'Old Growth', commanded Shepard to be in awe, saying every step the squad took was a transgression. It saw humans as "meat, good only to dig or decompose". After being betrayed by Saren, the Thorian had no interest in making a deal with "those who scurry" and began sending clones and Thorian Creepers after the squad. Shepard destroyed the neural nodes distributed throughout the building, dislodging the Thorian and sending it plunging through the ruins to its death.

Much to Shepard's surprise, Shiala was almost sad about the Thorian's death. Despite what it did to the colonists and Shiala herself, it was a unique form of life that would never be seen again.

In the aftermath of the geth attack, ExoGeni took the remains of the Thorian as they pulled offworld. Unfortunately, the effects of the Thorian spores still affected its victims. The colonists began having headaches or muscle spasms, similar to what they experienced while under the Thorian's control, whenever a colonist goes near a former Thorian victim, they could feel the victim's heat sensations or pain. Shiala, if spared, has her skin pigment changed to green, similar to her clones, and her biotic abilities are unstable. Zhu's Hope contracted Baria Frontiers in hopes to studying and curing this affliction.

When the Reapers attacked Zhu's Hope, the lingering hive mind effects of the spores allowed them to coordinate effectively. The colonists (and Shiala, if she was still alive) were able to hold against the invading forces until they fully evacuated the colony.

During Commander Shepard's search for Leviathan, one of Dr. Garret Bryson's datapads explains his reasoning that the Thorian was a unique species because it had managed to develop without the use of mass relays or the Reaper technology that galactic civilization were based on, instead depending solely on organic tools. Bryson compares Leviathan to the Thorian, concluding that Leviathan must survive in a similar fashion given how long it has had to evade the Reapers.