Thresher maws are subterranean carnivores that spend their entire lives eating or searching for something to eat. They are enormous, violent creatures that burst up from the ground without warning when disturbed.

They reproduce via spores that can lie dormant for millennia and are robust enough to survive prolonged periods in deep space and atmospheric re-entry. As a result, thresher maw spores appear on many worlds, spread by previous generations of space travelers.

Thresher maws live alone in nests spanning large areas underground. They can grow in excess of 30 meters above the ground, with a body nearly twice that size beneath the surface. The body of an adult thresher maw never entirely leaves the ground; only the head and tentacles erupt from the ground to attack.

Aggressive and highly territorial, thresher maws feed by absorbing significant quantities of solar radiation and survive best on planets, asteroids or moons with little or no atmosphere. They also consume minerals and ores from the ground itself for use in an unusual form of photosynthesis. This metabolic process, utilizing solar radiation and minerals as raw materials, creates the fuel that powers their various biological processes and allows them to move their significant mass with surprising speed.

Due to their size, and their burrowing method of movement, thresher maws are mostly immobile above ground, but can move at incredible velocities through subterranean environments. They can absorb a tremendous amount of damage and are very hard to kill. Their attacks consist of spitting a powerful, viscous acid that splashes on contact, burrowing up from beneath their prey, and smashing their targets with their claws in close range while emitting infra sound. Due to the overwhelming, direct physical nature of their attacks, shields are completely ineffective at mitigating any damage that is taken.

The Alliance first encountered threshers on the colony of Akuze in 2177. After contact was lost with the pioneer team, marine units were deployed to investigate. The shore parties were set upon by hungry threshers, and nearly the entire assault force was killed. Since then, thresher maws have been discovered throughout the galaxy, surviving even severely hazardous environments. Their physical and biological origins are unknown, although it is widely assumed they were "spread by a previous generation of space travelers", possibly before even the asari. 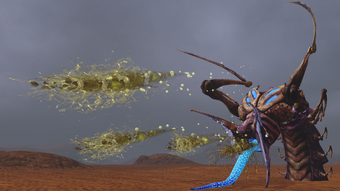 If Commander Shepard has the Sole Survivor background, Shepard alone survived the thresher attack on Akuze. However, a second survivor may be encountered later at a facility on Ontarom. Corporal Toombs, leader of a group of mercenaries who stormed this facility, claims that a black-ops group called Cerberus caused the massacre at Akuze deliberately. He says Cerberus scientists wanted to study the thresher maws, so they let them kill not only the colonists, but the marine rescue team as well, to watch and study. Cerberus was delighted that Toombs survived and held him captive for years, using him for experiments. It is likely Toombs' story is true, as Cerberus used a similar technique six years later, luring Admiral Kahoku's marine team to their deaths in a thresher nest on Edolus.

Thresher maws are encountered on a number of uncharted worlds. There is usually only one per planet, but some have two. They are usually encountered in the Mako, but can be fought on foot as well, though this is exceedingly dangerous. The maws that are encountered can be bypassed if necessary. Planets known to have thresher maws are Antibaar, Chohe, Nepheron, Nonuel, Presrop, Xawin, Trebin, and Edolus.

A thresher maw shows up during Grunt's Rite of Passage into Clan Urdnot after all other predators have been neutralized. Lured to the proving grounds by persistent ground pounding by a giant piston in the complex, the maw proceeds to attack Grunt's krantt as the final test of the krogan's skill.

If the thresher is slain within a set time limit, Gatatog Uvenk informs Shepard that no krogan has slain a thresher maw on foot in generations; the last one to accomplish this feat was Urdnot Wrex. EDI also tells Shepard that defeating the thresher maw has generated several breeding requests for Grunt and even one for Shepard. Jubilant krogan in the Urdnot Camp can be heard exclaiming that they will be eating "thresher steaks" for months. 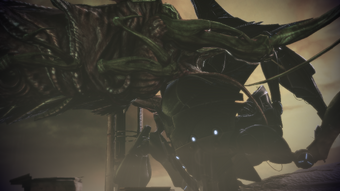 Kalros, a legendary thresher maw known as "the mother from which all other thresher maws spawn" and the largest thresher maw yet seen, plays a major part in the ongoing Reaper war of 2186. She roams Tuchanka's wastelands near the salarians' Shroud facility, acting as a natural deterrent to the vital installation. A mural found within the ancient krogan city nearby that Shepard explores prominently depicts Kalros, indicating that she is at least as old as the city itself.

She is summoned to attack a Reaper Destroyer that is guarding the Shroud. Shepard activates two maw hammers that pound the ground to call her, and she responds in the way her territorial instincts tell her. She attacks and defeats the Destroyer by coiling around it and pulling it into the ground, clearing the path to the Shroud.

Kalros' size may cause Javik to remark that thresher maws are now too big to ride, indicating that the maws were much smaller during the Protheans' time.