Throw uses mass effect fields to hurl a target away from the user with damaging force.

Throw is a biotic talent in Mass Effect. Throw is mostly used to keep opponents at a distance by either launching them away or knocking them over, damaging them and rendering them helpless.

In certain areas Throw may knock enemies off ledges, making them fall to their death. If used near destructible objects, Throw can break them and hit enemies with debris. Any moveable boxes can also be Thrown into them, injuring them further as their shields cannot absorb the damage. (However, this applies to the abilities of enemy biotics too, so watch out for nearby objects when fighting them.) In enclosed quarters, Advanced and Master Throw are strong enough to punch enemies against walls and cause significant damage. This technique is especially useful against Thorian Creepers, who aren't physically robust and will be squished by Throw.

The effects of Throw can be compounded to deadly, and often hilarious, effect. When Throw is used in conjunction with Lift, the Lifted target (being above the surrounding environment) can be more easily cast out over a drop or, when used in low gravity environments, launched into open space for an instant kill. Likewise, using throw simultaneously by multiple squad members on a single target compounds the effect, blasting them an often fatal distance. Possibly the best compounding effect can be experienced with Liara T'Soni and Urdnot Wrex as squadmates. Liara may begin with Singularity drawing multiple targets into a dense space, Wrex and a biotic Shepard can then use upgraded Throw in unison to hit most or all of the floating enemies. This has the added effect of damaging them and providing extra time for your squad to regroup. 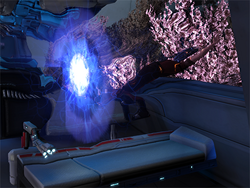 Throw is a biotic power in Mass Effect 2. Throw uses mass effect fields to hurl targets away, damaging them if they hit an object. It can now be precisely curved around objects and cover to hit its target. 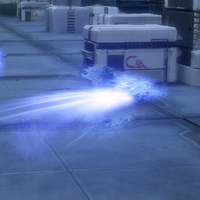 Choose to evolve the power into one of the following,

Toss your enemy through the air with this biotic blast.

Retrieved from "https://masseffect.fandom.com/wiki/Throw?oldid=510835"
Community content is available under CC-BY-SA unless otherwise noted.