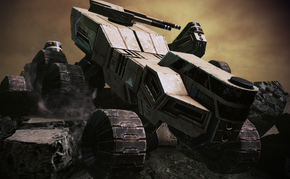 The Tomkah is a large infantry fighting vehicle fielded by the krogan on Tuchanka. It is outwardly similar to the Alliance M35 Mako and M29 Grizzly, although it is considerably larger (to house the much larger krogan), standing almost twice as high as a standard Alliance IFV. Its only visible armament is a large double-barreled turret resting on the top of the vehicle, most likely a mass accelerator. Its armor is strong enough to withstand a ten-ton bomb.

Vital to the tomkah's operation is a part called the combustion manifold. The vehicle can run without it, but mechanics are very reluctant to deploy affected vehicles out in the field. Creating a replacement takes some three days' worth of work.

Retrieved from "https://masseffect.fandom.com/wiki/Tomkah?oldid=516727"
Community content is available under CC-BY-SA unless otherwise noted.