Captain Toni is the nominal leader of Delta Squad, a special forces unit of the Alliance deployed to Fehl Prime in 2185. He is a strict leader, professionalism evident in his gait and words. According to Lieutenant James Vega, Toni is a "hard-assed son of a bitch" but a "good leader".

Captain Toni arrives with Delta Squad at Fehl Prime in 2183. Though commanding a squad of highly-trained special forces, the mission on the planet is actually his men's first real engagement. Alliance Command initially deployed his team of rookies with no idea what they're up against so he proceeds to sync the mission briefing to his guys' omni-tools after everyone finishes gearing up.

The krogan Blood Pack mercenaries are currently laying siege to Fehl Prime, and Toni explains that the colony is one of humanity's top pharmaceutical processing facilities. The enemies are currently outside the colony hammering its kinetic barriers so Toni gives out the general plan of attack: Hit hard and fast with strafing runs from their Kodiak shuttles, drop off marines between the colony and the mercenaries, then "vigorously negotiate" the enemy's defeat. He starts and concludes the briefing with rousing military bravado and stern words of caution for the "virgins", and the squad takes everything in positively.

The plan initially works well against the Blood Pack, with lots of their vorcha and vehicles blown to giblets by the air strikes. The tide is soon reversed when missile launchers are brought to bear, and Toni's shuttle is shot down by the mercenaries during its landing maneuver. Toni dislocates his right leg in his shuttle's crash, lucky to be alive in comparison to a good number of men under his command in the same vehicle. 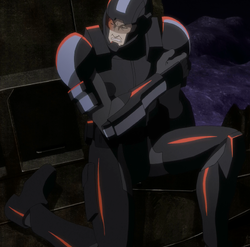 Despite the pain, he orders the shuttle's survivors to evac their burning ride. Vega sets his CO's leg straight before complying, giving Toni a thermal clip to bite on. It doesn't help in muffling out his scream, alerting the Blood Pack to the squad's location, and Toni falls unconscious as he is carried by Vega to safety. In light of the Captain's incapacitation, Vega assumes command of the remnants of Delta Squad and assigns their shuttle pilot Mason to guard Toni while the rest of them mount a counterattack.

Toni has regained consciousness by the time of the Blood Pack's defeat and congratulates his marines for pulling off what seemed like an impossible feat. He is wheelchair-bound by Vega's side during the Lieutenant's report to Anderson and Admiral Hackett, admonishing the big man for being too modest about his skills and telling him to quit being coy and accept their superiors' praise.

Two years later, the colony is flourishing and its defenses are being bolstered by state-of-the-art defense cannons and kinetic barriers. Toni leads the Delta Squad in its daily duties guarding the colony, walking around with a cane and pursuant to Hackett and Anderson's orders. One day, He orders the marine detachment to investigate some kind of anomalous signal near some ruins outside the colony. The signal is disrupting offworld communications, and the Captain needs it gone regardless of what it is.

He tells his squad to get combat-ready in case of hostiles and further informs the men that their APC is currently down for a suspension overhaul, potentially necessitating the need to double-time to the place on foot. Luckily for his team, a civilian named Messner who was in the same lift that brought Vega to him volunteers his secondhand Mako for transport. 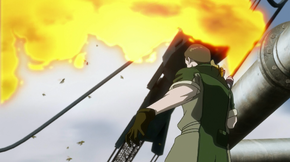 The Collectors attack the colony soon after, and it becomes apparent that the humans' military-grade kinetic barriers are useless against the Collector ship's Seeker Swarms. Toni helps fight off the invaders with a flamethrower along with a couple of soldiers but gets stung in the neck and paralyzed not long after. He is carried off into the Collector ship along with the rest of the colonists, thrusting Vega once again into leadership of the squad.

Toni reawakens with the other colonists much later when the remnants of Delta Squad finally manage to infiltrate the Collector ship and release an antidote to the paralysis, approving of April's faith in his Lieutenant when the kid starts searching for the guy. He contacts Vega on his omni-tool and informs the man about the dire situation as Collector forces start attacking the colonists. Toni, along with some able-bodied men, apparently managed to procure Collector weapons, trying their best to defend the other colonists while waiting for James and his evac rescue. 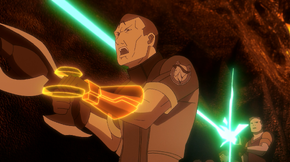 With little time remaining because the Collector ship is rapidly crashing back to the planet, Vega has to make a difficult choice between saving the people still stranded aboard the ship and saving the intel about the Collectors that can be used to save other human colonies. Toni never receives word from Vega regarding the situation but seemed to sense the turmoil in the young man's mind, urging Vega that his decision must come now or never.

Vega steers the freighter he and Milque commandeered to save the intel, and Toni dies in the company of April and her mother Christine as the ship explodes on the surface of the planet, muttering "God have mercy" when he realizes the evac isn't coming.