Trebin is a modest terrestrial world, with an atmosphere composed of nitrogen and argon. Its surface is mainly composed of nickel with deposits of silver.

Trebin's environment is relatively mild, but the scarcity of water or similar enabling substances has prevented the development of any biosphere. ExoGeni Corp recently performed a test impact of a single water-ice comet into the surface, the first step of a long-term plan to thicken the atmosphere and introduce water to the environment.

A survey team is on the surface, monitoring the geological and meteorological effects of the test impact. Most of the water released is still in the form of atmospheric vapor, but thick cloud banks have formed. There is every indication that this arid world will soon see its first rain. The survey team's progress has been hampered by frequent mechanical or computer failures in their GPS satellites. 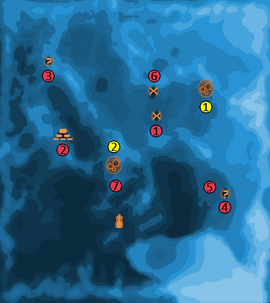 Retrieved from "https://masseffect.fandom.com/wiki/Trebin?oldid=521034"
Community content is available under CC-BY-SA unless otherwise noted.