Mass Effect: Paragon Lost
Treeya Nuwani is an asari anthropologist living on Fehl Prime in 2185. She is a peaceful person and hates the idea of warfare and violence. She is mostly absorbed in her research and is quite oblivious to James Vega's obvious romantic interest in her. Though initially frosty at the Alliance's interference with her work, Treeya gradually comes to trust Delta Squad.

In 2183, during the Blood Pack's attack on the colony, Treeya remains at the side of her close friend Christine, who fights bravely despite being a civilian. When Christine is grazed in the shoulder, Treeya rushes to her, supporting her and tries to deter her from re-entering combat as she is not a soldier. Christine asserts that they must keep fighting until the Alliance marines arrive. Vega and the remnants of Delta Squad deal with the mercenaries, and the colony survives.

Two years later, the colony is flourishing and new defenses are being installed owing to a spate of colony disappearances in the Terminus Systems. One day, while Vega is out supervising the installation of the guns and barriers meant to protect the colony, he encounters a bunch of civilians, Christine and Treeya included. He's on good terms with most of them, but Treeya herself doesn't appear to be interested in him despite his rather transparent attraction to her.

Treeya then boards the tram headed to her research area. Lt. Vega also boards the same tram in hopes of talking to her, but an awkward silence ensues as Vega is unable to broach the subject and Treeya's frostiness towards Alliance personnel doesn't allow her to speak either. When Treeya is barred from entering the area she, James and Messner are also trying to get in, her dislike is revealed to Vega: the Alliance was interfering with her research ever since they stepped in. She angrily rebuffs Vega's offers of assistance, citing "grunts" like him are incapable of understanding her work. Regardless, being the resident expert on archaeology as well, she accompanies Vega and his squad to some ruins when something jamming long-range communications was found there.

Arriving at the ruins using Messner's second-hand M35 Mako, Treeya stays back with Milque and Messner as the others go for a closer look at the artifact thought to be the source of the jamming. Treeya is rather agitated when the decision to destroy the artifact is reached and vainly tries rushing at the artifact, almost falling into an abyss. Saved by Milque's warning call, her legs give way and she crumples to the ground in shock. 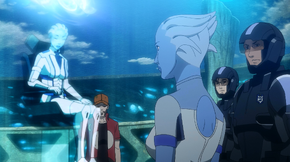 After Delta Squad disables the artifact, instead of going back to the Mako, Treeya tries to determine the artifact's origins through the use of ancient technology in the ruins. With a scrap of the artifact at hand, she contacts her mentor, Liara T'Soni, for advice regarding the thing. Though skeptical about Dr. T'Soni's theory about the Reapers, Treeya nevertheless trusts in her judgement. Their conversation is cut short when the Collectors arrive to kidnap the colonists.

Arriving back at the colony and having no intel yet on the situation, Vega advises going in stealth for recon first, staying out of the aliens' sight lines. Moving out of a vertical conveyor belt headed to the underground sections of the colony and into a level floor, Treeya accidentally dislodges a rock that strikes the surface below hard, alerting the Collectors and causing them to fire a volley in their direction. James fortunately has the presence of mind to keep her close and hidden throughout the ordeal, until the Collectors who arrived inspecting find rats and fly off deciding the whole thing was a false alarm.

Treeya is horrified to see the colonists paralyzed and everything and everyone she held dear now at the mercy of the Collectors. She tries to stop the attackers from taking the bodies of Christine and April, but is restrained by Vega, who stressed on intelligence and discretion in order to maximize their chances of saving them.

With most of the colonists harvested and brought up to the Collectors' ship and the only course of action remaining is to fire at the ship in hopes of disabling it using the newly-installed Alliance guns, Treeya suggests minimizing the weapon's output since there are still civilian casualties to consider. Vega agrees. However, the shot is deflected, and the ship's retaliatory fire destroys the weapon. Petrified both at the cannon's failure and at the Collector ship weapon port shaped like an eye staring back at her, she is rescued by Vega who carries her to safety.

In the underground lab where the group holed up following the fiasco, Treeya tries to help revive Essex who fell fighting the seeker swarms. At the revelation of Messner's identity as a Cerberus operative, she is confused as she has never heard of the pro-human survivalist group. Nevertheless, she is horrified at realising that the artifact was planted by Messner to lure the Collectors to the colony. 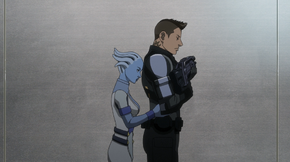 During their time in the lab, Treeya and James bond for a moment when the latter begins expressing doubt at the validity of his decisions. Treeya, having warmed up to James during the course of him saving her life numerous times, assures him that she knows he did what he thought were the right choices, and that he shouldn't blame himself for failing to save everyone. Their moment is interrupted by Nicky, who finds a cure to the Collectors' paralyzing venom in the lab. Treeya administers a test dosage of the cure on the stunned Essex, but the substance fails to show immediate effect.

A Praetorian shows up and starts tearing up the lab. The squad rushes to Brood's ship, who incidentally is in an uneasy alliance with Delta Squad. The Praetorian persists in its attack and Nicky takes a fatal wound to the gut before it is defeated with the timely arrival of Essex. Nicky dies cradled in Treeya's arms.

The squad cooks up a plan by flying Brood's ship straight into the Collector ship in order to take out its drive core, and Treeya gets a few kills with a flamethrower during the inevitable interdiction fight. She is ecstatic at her success and blushes when James compliments her skills. Meanwhile, Messner shows his true colors by shooting Brood in the head, who was piloting at the time, and the ship makes a crash landing within the bowels of the Collector ship. 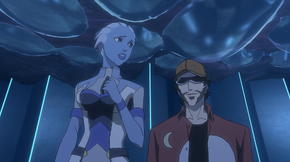 Treeya is captured by Messner and forced to interface with the Collector databanks to reveal the true nature of the colony abductions. Messner uses her abhorrence towards death and destruction to his advantage by telling her she can save many lives by her actions. Treeya complies and makes the mind connection with the databanks, which would have killed species without the asari's mental abilities. She witnesses the Prothean defeat to the Reapers and their subsequent conversion into the Collectors, along with other relevant intel such as the location of the Collector base and the ultimate fate of the humans they abducted. Treeya, along with Messner, is then brought to the Collector leader who decides Messner has reached the limit of his usefulness.

The Collectors decide Treeya is a "contamination" to their human genetic material and accuses Messner of threatening their mandate by allowing Alliance soldiers to go as far as they did. Despite Messner's feverish protests, the Collectors brand him for "ascension". Messner grabs hold of Treeya and throws her into the pod meant for him. At the last moment, Treeya steals Messner's bracelet that contains all the intel collected about the Collectors. Just as Vega and Essex arrive, Treeya's pod is dislodged into vacuum and despite Vega's herculean efforts, her pod is ejected into space. 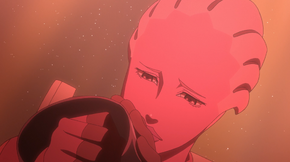 Treeya tells Vega about Messner's bracelet on the comm while descending into the planet's atmosphere. She urges Vega to leave her and save the colonists, saying there is no choice but to sacrifice the one for the many. She finally understands Vega's feelings for her and crying, consoles him during his moments in agony of indecision. With the Collector ship destabilized and falling from orbit due to Milque's actions, Vega has to make a choice: let her die and save the colonists still trapped in the ship, or leave the colonists behind in order to save his love and the intel. In the end, he decides to save Treeya despite her vehement protests.

Later, she is present during Vega's debriefing on the Citadel and is quite embarrassed to be alive when thousands more colonists perished. Bruised and limping but still breathing nonetheless, she walks tentatively by Vega's side, not daring to look him in the eye, who is now devastated by the mission's outcome.

Back on Fehl Prime, Treeya breaks into sobs out of grief for the tragic loss of the colonists. She comes to comfort Vega during his dark moments. Vega admits he is unsure about his choice now, but smiles at her and tells her he is glad she is there. They then salute the Memorial Wall.

Retrieved from "https://masseffect.fandom.com/wiki/Treeya_Nuwani?oldid=516688"
Community content is available under CC-BY-SA unless otherwise noted.