Mass Effect: Foundation
Tristana is a former Justicar currently freelancing as a prolific assassin. She once had a relationship with Zaeed Massani.

Zaeed identifies her as a "stone-cold bitch", claiming he broke off the relationship before it killed him. Tristana is approached by Zaeed during one of her assassination stints, sniping at a human male target while listening to him prattle on another job proposition. The job is bring down the turian frigate Verrikan, and she opines it's not the sort of thing that can be walked away from easily. Zaeed convinces her of the incredible payout if she makes it out of the job alive.

At Zaeed's mission briefing for all the mercenaries he recruited Tristana vocally raises her skepticism at taking down the frigate with only four soldiers. Zaeed assures her they'll go home happier than a volus in a bank vault: he claims to have thought of everything, and they will be raiding the ship with stealth, not strength.

During the mission itself, Tristana makes it to the frigate's outer hull along with the other mercenaries. Unfortunately, Zaeed's inside man was caught trying to let the mercs in. The intruders are blown off the outer airlock, bouncing down the hull but secured by their tether cables. Their salarian tech specialist is lost, but the mission is still a go as they find another way into the ship. 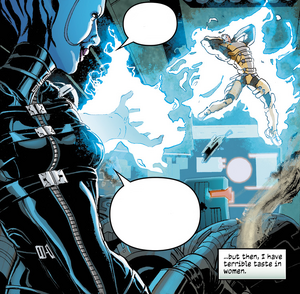 Tristana and the other merc Jace Reyn are tasked by Zaeed to draw the heat away from him while he wings it to the bridge of the ship. The two mercs make a stand behind a barricade in front of a door, more than capable of holding out against turians swarming their position. Tristana flings biotic attacks one after another, calling it a pointless grind in contrast to the other merc's enthusiasm. She promptly unlocks the door, slips in, locks it behind her and leaves the merc to hold alone, rhetorically musing why she's wasting time.

She arrives just in time to see Zaeed face off against over a dozen turians in the bridge. She blows the head off Zaeed's turian hostage, splattering the right half of Zaeed's face in brains. Zaeed complains about it, but Tristana quips back his hostage doesn't look so smart anymore. The two of them win against the dozen-plus armed turians.

Tristana deems the payout upped to fifty-fifty when Zaeed inquires about Jace. She turns on Zaeed as soon as he sets the ship to crash on Impera. As it turns out, Vido Santiago hired her to take care of Zaeed after concluding the Verrikan job, but she isn't one to waste an opportunity.

The planet's gravity kicks in, causing her to momentarily lose her biotic grip on Zaeed. The ex-lovers duke it out while the ship is crashing - she takes a knife below the right breast while she has Zaeed's neck on a stranglehold. A hole ruptures at the hull of the ship, causing both of them to be sucked out. Tristana manages to grab onto something, as does Zaeed, a few feet above her.

Exhilarated by the fight, she reminds him he always knew how to show a girl a good time. Zaeed agrees, but wryly quips he's going to let her down this time because his heart already belongs to somebody else. Tristana receives a combat boot to the face, loosening her grip and causing her to plummet to the surface far below.

Retrieved from "https://masseffect.fandom.com/wiki/Tristana?oldid=516913"
Community content is available under CC-BY-SA unless otherwise noted.