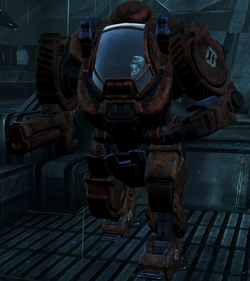 The Triton ADS is a mech encountered in Mass Effect 3: Leviathan. It resembles an Atlas mech and is armed with a rocket launcher and mass accelerator cannon for ground combat situations, but is also capable of underwater exploration. While underwater, it can launch flares. It also has emergency boosters on its back to facilitate rapid ascent to the surface if needed. Steve Cortez explains that the Triton is an old military mech model that has been converted for deep sea diving.

Commander Shepard acquires a Triton from the wreckage of a crashed ship, the MSV Monarch, on 2181 Despoina and uses it to travel to the ocean's bottom while searching for the Leviathan.

Retrieved from "https://masseffect.fandom.com/wiki/Triton_ADS?oldid=431720"
Community content is available under CC-BY-SA unless otherwise noted.