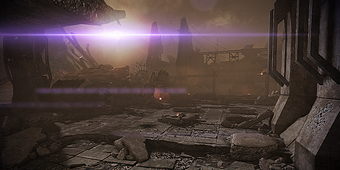 The turian team that crashed on Tuchanka was trying to prevent Cerberus from detonating a bomb that would cause massive casualties on the planet. Land on Tuchanka and help the turian platoon stop Cerberus.

This mission is acquired automatically after meeting with the stranded turian platoon.

Warning: Once acquired, you have a limited window to accomplish this mission. If you complete any three other missions before doing this one, it will no longer be available and will be considered failed.

This is a fairly short, but intense, mission with many shielded opponents along with unshielded basic troopers. A squad combination featuring a mix of biotics to throw the unshielded enemies around and tech powers to take down shields will serve you well. Power Combos that create explosions of any kind will be useful against a massed deployment of enemies at the end.

Firefights tend to be long-range in this mission. Sniper rifles and similarly long-range guns are recommended.

Note: If the Virmire Survivor is part of the crew when this mission is undertaken, there is some interesting dialogue related to the Virmire mission for either Kaidan or Ashley, both following the mission and during it if they are brought along as a squadmate.

After being dropped in, head to cover immediately; Cerberus Assault Troopers and Centurions are waiting to greet you. In spite of the impressive Omaha-Beach-like bombardment, it is safe to ignore the incoming bombs and concentrate entirely on the Cerberus troops.

Fight your way through the Cerberus soldiers and explosions to the ruined building ahead. In addition to troopers standing practically right in front of you, more will appear from the rear, and will tend to concentrate around some generator-powered cover in the mid-section and then at another generator up on the high ground in the back. The guards at the high-ground cover can be quite tenacious, but once you reach the mid-section generator, if you immediately head to the far right side and take cover behind the long wall, you will be able to get a clear shot at the rear generator, both eliminating the cover and damaging the nearby enemies.

The fighting and explosions will stop, so go through the break in the wall and head up the ramp to your left. About halfway up the ramp to the next floor, on the left hand side, you will find an M-29 Incisor, which is a sniper rifle that fires in three-round-bursts.

Proceed up the ramp and pick up the Shotgun Blade Attachment. Once you round the corner, Cerberus assault troops, engineers, and guardians will attack from behind shield generators. At the end of the hall (far right), you will find the Rosenkov Materials Gauntlets.

Head to the far left end of the room, and before you turn around find a Console to salvage (5,000 credits). Head up the rubble and when you go around to the left you will find an SMG Heat Sink in the corner on the floor around when Lt. Tarquin Victus notifies you about Cerberus putting up a fight. Then, around the corner, more Cerberus assault troops and centurions appear. Watch out for a Turret in the back, and when possible shoot out the generators and shield pylons that protect and reinforce the enemy. Remember that shooting a generator creates an explosion.

After the battle, head down the room and once you get past the open pit on your left, you will find a med kit and Pistol Scope along the far wall in the next room. 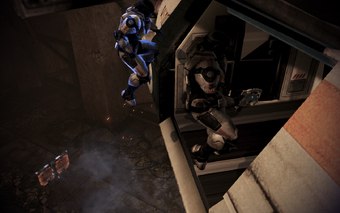 As you climb out of the building, two Cerberus troops are being evacuated; if you act quickly, you can kill them. Cross the bridge to where the troops were, and salvage the data pad (5,000 credits). As you turn the corner, there are more Cerberus Assault Troopers to deal with, but, as you make your way through them, more are being evacuated.

Make your way up the ramp, and take a look at the bomb site, and then head up the ladder to your right. Right ahead, against the wall, is a Sniper Rifle Concentration Mod. A little farther along, you will find a Pistol Melee Stunner. After you make your way down the ramp, you will see more Cerberus soldiers fleeing, but they will place a turret, so run to cover. On the left-hand side, before the turret location, you will find Turian Technology to salvage (2,500 credits). Pick up the med kit near the destroyed turret, and Turret Control Schematics partway up the crates. Continue around the corner and down the ladder to trigger a cutscene with Lt. Victus. 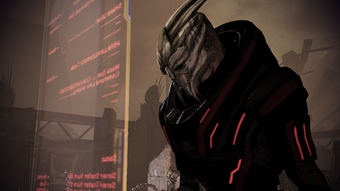 After the cutscene, you must defend Lt. Victus from Cerberus while he disables the bomb. There will be a few Cerberus troops on the ground, and then more will arrive by shuttle in groups of 4-5; while they're all grouped together just before or after a drop is a great time to hit them with power combos to produce explosions. Stasis Bubbles placed directly underneath the shuttles can create amusing traffic jams as well.

The first three shuttles contain a mix of Assault Troopers and Centurions. The primary complication during this phase is that the Cerberus forces will actively try to damage Victus, and you must not let his health drop to zero.

Then an Atlas drops in, followed by one last shuttle of Cerberus assault troops and centurions. There is an M-560 Hydra rocket launcher in the right corner, which will allow you to get rid of the Atlas pretty easily. Once all Cerberus forces have been dealt with, another cutscene begins, showing Lieutenant Victus sacrificing himself to prevent further potential collateral damage of the bomb, ending the mission.

If successful, you will receive a +75 War Asset from the turians. Not completing this mission in time results in a 300-point reduction of the krogan War Asset — a significant portion of the krogan population (and Eve, if she survives Priority: Tuchanka) die from the explosion.

If you speak to Garrus right after the mission, the Urdnot leader asks Garrus via intercom if he knew about the bomb. This only occurs if the mission is completed prior to Priority: Tuchanka. If completed after, Garrus will only comment that it's a good thing there were no krogan onboard the Normandy when the bomb was revealed.

If Priority: Rannoch has been completed and Tali survived, she can be found in Engineering conversing via intercom with the Virmire Survivor about how Tarquin's sacrifice was similar to the sacrifice of the squad member who died on Virmire.

If the Virmire Survivor is on the Normandy, they can be overheard speaking to Garrus via intercom about Lt. Victus's sacrifice after the mission.

Shepard receives the following emails from the War Room dignitaries if they already left the Normandy by the time of this mission's resolution — after Priority: Tuchanka.

If Wreav is the Urdnot leader, Shepard receives the following email from him if the mission wasn't completed on time.

If Eve died in the bombing, Wreav's message is slightly modified.

Wrex's emails in comparison are quite despondent.

And if Eve died in the bombing...

If this mission was successfully completed, however, Adrien Victus sends this email instead.