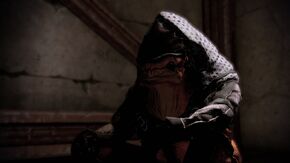 The chief scout for clan Urdnot recently sent a scout into Weyrloc territory. Unfortunately, the scout has gone missing.

Talk to the chief scout next to the pyjak shooting range before accepting Mordin's loyalty mission.

Commander Shepard encounters the scout in a holding cell in the process of completing Mordin Solus's loyalty mission. The scout has been subjected to experiments by a former student of Mordin's. He refuses to leave with Shepard, stating that he must stay so that a cure for the genophage can be found.

Shepard can convince the krogan to go back to the city, either using Intimidate (+7 Renegade and +2 Paragon points) or Charm (+11 Paragon points) for a quick resolution, or standard responses for a slower conclusion. Whatever the method used, the missing scout will roar back to life and escape the base, completing the assignment. However, lying to the krogan will make him attack, forcing Shepard to kill him.

Later, the scout, named Urdnot Darg, will send an e-mail message entitled Back from female camp to Commander Shepard:

Retrieved from "https://masseffect.fandom.com/wiki/Tuchanka:_Old_Blood:_Missing_Scout?oldid=456644"
Community content is available under CC-BY-SA unless otherwise noted.