The leader of Clan Urdnot wishes to speak with Shepard.

Upon landing on Tuchanka, Shepard is requested to pay a visit to former shipmate Urdnot Wrex, who has acquired a position of power on the planet and may provide some information.

Note: This mission is only available if Wrex was recruited and not killed on Virmire. 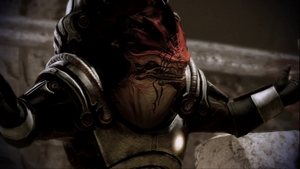 Go into the main area and find Wrex. He'll be happy to see Shepard and will chat about their past endeavors and how he has united many krogan under Clan Urdnot. Shepard can ask if Wrex will join the squad again, but he will decline. Wrex may also be questioned about Grunt's condition and/or Mordin's old assistant.

After Shepard has spoken with Wrex, the mission is complete.

Urdnot Wrex remains a friend and ally. He can provide information regarding missions in the area.

Retrieved from "https://masseffect.fandom.com/wiki/Tuchanka:_Urdnot_Wrex?oldid=476405"
Community content is available under CC-BY-SA unless otherwise noted.