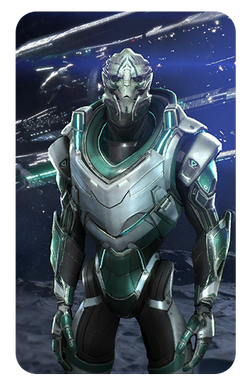 Avitus Rix believes that Macen Barro, the turian Pathfinder, is still alive. He has recruited you to help find him.

Prerequisite: Turian Ark: Not Dead Yet

Automatically started after Pathfinder Ryder has landed on Kadara Port, which completes the ON HOLD objective for the previous mission.

Read the email from Avitus talking about a trail leading to the world Elaaden. Acknowledging it will provide the navpoint

for the next objective.

The navpoint is located in the northeast of the map in the Sea of Ataraxia. Head northeast of New Tuchanka Forward Station.

When you approach the navpoint, a short distance away a new objective and navpoint is added.

Go to the small hill with debris and vehicles and the navpoint. You'll come under attack from Outlaws. Defeat them.

Scan the 8 Cryogenic Stasis Pods for +10

). There are no life signs. However, one of the pods is still powered.

Reading the logs on the Powered Stasis Pod reveals that it was ejected from Natanus long after the ark hit the Scourge.

Ryder says that the squad should finish scanning the pods for Macen and then report back to Avitus. Afterward, you receive +29 AVP

Head back to the Tempest to speak to Avitus. He has been receiving coordinates and numbers he believes from Macen via his implant and wants to investigate the location.

The navpoint is in the Remav system - same as H-047c. H-047c was meant to be the turians' homeworld, but the world and the ark are both severely damaged by the Scourge. Avitus contacts you and requests to meet on the ark.

There is no gravity on the ark and SAM says the hull is barely holding together. Avitus says it looks like whoever piloted that ark wanted to get to H-047c no matter what. Rather than speculating, the team should investigate the ark.

When you're able to move around on the ark, there is a lootable container and a terminal in the first room. Note: There is no combat on the ark.

and leads to an Ark Natanus Console to divert power to another door.

Heading into the second room (Foyer), there is another lootable container and another terminal.

On a console in the second room, you'll find an audio log from the ark's captain. The ark is taking serious damage from something (Ryder knows this must have been the Scourge) and she ordered evacuation of the ark.

Head into the third room and open the left door. Scan the Debris for +10

Interacting with the right door in the third room reveals that opening this door also requires a power diversion. Go back to the second room and interact with the Ark Natanus Console to power the door.

Return back to the third door and open it to enter the fourth room (Atrium).

Interact with the Ark Natanus Console. A cutscene starts and Macen is heard struggling to get to Avitus' pod.

A new navpoint is added in the fifth room. Open the door and head into the room.

You will have to interact with another Ark Natanus Console to divert power to the door. Opening the door starts a cutscene.

The ark's SAM node is damaged. However, Ryder's SAM is able patch it up enough to learn that it was ordered by Macen to send the ark's coordinates to Avitus to make him come to the ark so the Natanus SAM could complete the transfer to make Avitus the new turian Pathfinder as Macen was dying.

Ryder concludes that it's safest to move the ark's SAM to the Nexus before the transfer is made.

You now have to decide to either convince Avitus to become the new pathfinder or not.

If you don't want to convince Avitus, Captain Nozomi Dunn will die during the crash-landing in Meridian: The Way Home. Four pathfinders are required to keep Nozomi alive and Avitus as a pathfinder makes the total four.

One of two emails will arrive from Director Jarun Tann.

If Avitus is the new pathfinder:

If Avitus refuses to be the new pathfinder:

Retrieved from "https://masseffect.fandom.com/wiki/Turian_Ark:_Lost_But_Not_Forgotten?oldid=515369"
Community content is available under CC-BY-SA unless otherwise noted.