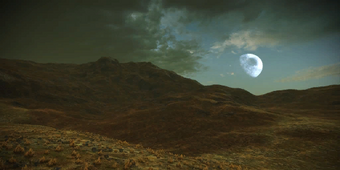 Admiral Kahoku has given you the coordinates to a research facility run by the Cerberus group. You need to investigate the planet Binthu to find out why Cerberus is unleashing alien monstrosities in the Attican Traverse.

After completing UNC: Missing Marines, the next time you use the Galaxy Map you will receive a message from Admiral Kahoku. He has information that the ambush which killed his marines was orchestrated by a group known as Cerberus. Kahoku has located three of their research facilities, on the planet Binthu in the Yangtze system of the Voyager Cluster. There are three Cerberus research facilities on Binthu, which must be cleared.

You will be facing mostly human troops, a combination of snipers, biotics, and soldiers, along with their organic specimens. Since the pairs of turrets are all outdoors where you can use the Mako, bring anti-organic ammo rounds and powers. Having Throw can be useful for getting enemies of different factions to fight each other. Armor should be set up for defense as best as possible, and squadmates should be specializing in crowd control and disabling opponents. Tali, Liara and Wrex are good choices here. In terms of weapons, doing as much damage as possible in the shortest amount of time is the best idea, since Cerberus troops usually have good cover and/or immunity. It's also a closed-in environment, so shotguns become valuable here. 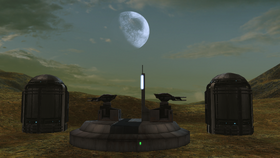 The three Cerberus bases are all similarly built: standard underground entrances with two defense turrets on top. Inside, you will find Cerberus troops – one sniper, two commandos, and two biotic research technicians in each base – working around forcefields in the centre of the room. These forcefields hold whatever creatures Cerberus is currently experimenting on: one base will hold three Rachni Workers, another will hold one Rachni Soldier, and the other base holds three Thorian Creepers.

One good technique for dealing with these bases, especially on higher difficulty levels, is to give Cerberus a taste of its own medicine: shutting off the forcefields at the first diagnostic station you see as you enter the main room will soon have the research specimens fighting with the Cerberus troops! The experimental subjects and the Cerberus personnel will then attack each other, giving you fewer enemies to face or a chance to pick them off while they're in disarray. You and your squad can even run out and hide in the anteroom while the fight plays out, but whittling down the enemies while they're distracting each other probably makes the strongest play, plus any rachni or Thorian Creepers who notice your squad can always be hurled back toward Cerberus with Throw.

The only potential disadvantage of lowering the forcefield early is the clear lines of fire you'll give to the sniper and biotics and in general the earlier concentration of all the Cerberus forces against you. Whereas the Thorian Creepers can inflict massive damage on Cerberus and are probably worth letting out early, with a weaker specimen population such as the Rachni Workers you may prefer to leave the force fields up during the fight, in which case one reasonable tactic is to send your squadmates to cover one of the pillars and cover the other yourself. Just watch for flanking enemies because sometimes your squadmates will let enemies through; alternatively you could simply race around the perimeter as a complete squad, attempting to isolate and overwhelm each of the individual Cerberus agents quickly, thereby defeating them in detail.

Once you've cleared the area, take time to explore each base. The first base you enter will have a console at the far end that when accessed will trigger one of your squadmates to say that Cerberus has other bases on the world. Each base will hold different loot. One will hold nothing, another will hold a technician kit, an aid station and locker, and the other will hold another technician kit and five medical stations and those will produce Sirta Foundation armor and various bio-amps. 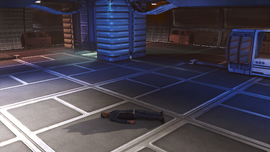 Note: If you activate the terminal in the first base before you clear the base of the enemies it holds, then the mission will not complete and you will be forced to reload the auto-save when you landed on the planet. Clear the base first, then activate the terminal. (In some cases this can also be fixed by leaving and re-entering the final facility, spawning the body necessary to complete the mission)

Regardless of the order in which you clear them, Kahoku will be located in the final facility. He was captured and murdered by Cerberus operatives soon after transmitting details of the operation to you. Examining Kahoku's body will complete the assignment and trigger the next, UNC: Hades' Dogs.

You check for a pulse but find none. Admiral Kohaku [sic] is dead.

Despite the ferocity of the creatures he was sealed in with, there are no signs of trauma to his corpse. The needle marks on his arm suggest a different means of execution.

Retrieved from "https://masseffect.fandom.com/wiki/UNC:_Cerberus?oldid=465589"
Community content is available under CC-BY-SA unless otherwise noted.