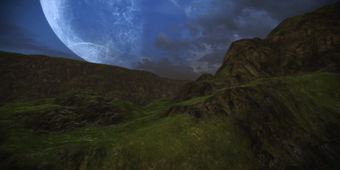 While on Noveria, you found a log listing an unauthorized transmission. Apparently someone thinks a doctor located in the Newton system is in grave danger. Unfortunately, it appears the message was intercepted by Noveria security before it could be delivered.

Alternative journal entry:
Someone has been killing every Alliance scientist who was involved in a secret project years ago. The only project member still alive is located in the Newton System of the Kepler Verge.

The assignment can be acquired through the following:

You'll be facing mercenaries backed up by snipers, so you may want armor mods that provide extra shielding or damage protection. Any squadmate you bring will probably do fine. Be aware, however, that physics abilities used outdoors may send enemies flying further than you'd like. On the other hand, knocking someone into the distance usually results in an instant death for them, so biotic abilities like Throw do have value.

On the inside, you'll be facing krogan opponents in cramped quarters, so if you're trained in them, a shotgun becomes a very valuable weapon, and area-of-effect abilities would do great here as well. Consider taking durable teammates, since cramped corridors with large amounts of opponents can quickly overwhelm and incapacitate other, more fragile teammates. If he's around, Wrex is especially strong here, his fighting style makes him an excellent choice for taking on the horde inside.

The assignment takes place on the planet Ontarom in the Newton system of the Kepler Verge. When you land on the planet drive to the base.

There are five mercenaries (three regular and two snipers) guarding the entrance. You can either drive up to the plateau above the base and snipe the mercs from there, or you can simply drive the Mako right up to the base and kill everyone from there. You will want to be careful here if you are on foot, because using powers such as throw and singularity, could send enemies flying very long distances. Once all the enemies on the exterior are down then head inside.

Once you enter, move to the first room. There are two crates and a med kit in this area, so grab them and prepare for a fight. 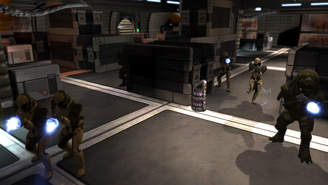 The next and main room contains 8 mercenaries, including 2 krogan, and a sniper. Use the limited cover near the entrance to take out the mercs. Watch out for the gap on the right, because the mercs will be using it to flank you. Move around if you need to because sometimes the mercs stay in the back and out of your firing solution.

Once all the mercs have fallen, loot the four crates in the main room. One is near the furthest pillar in line with the entrance door. The other three are near the door that leads deeper into the base. Once you have all four, head into the back of the base. When you reach the T-junction, the door to the left will be locked, so head to the right to finish this mission.

When you open the door, you find a soldier, Corporal Toombs, holding a scientist hostage. If Shepard is a Sole Survivor, the commander will recognise Toombs and, shocked, claim that Toombs died on Akuze with everyone else. Talking to Toombs will reveal that he and his squad fell victim to a Thresher Maw attack. While the other members of his team were killed, he was captured by scientists working for a shadowy organization called Cerberus, and he was used as a guinea pig in their experiments. Toombs had been killing the scientists responsible in revenge.

When Toombs tells his story to Shepard, he will describe his escape from Cerberus in two ways: 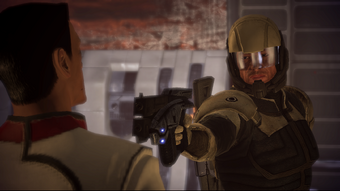 If you have at least 10 points in Charm, you can convince Corporal Toombs to lower his weapon and let the Alliance authorities arrest the scientist. If you have 8 or more points in Intimidate, you can shoot the scientist yourself. If Toombs is killed, the scientist will give you credits as a reward, but you can still arrest him afterwards.

Note: You must select "What happened?" when prompted to access these options. Otherwise, you will either have to kill him, or let him kill the scientist. However, unless you have sufficient Charm or Intimidate stats, he will either force you to shoot him, or he will shoot the scientist and then himself.

Note: If Shepard is a Sole Survivor, the option to shoot Toombs does not appear. The only way to avoid Toombs killing the scientist and then himself is to use the Charm or Intimidate options.

Retrieved from "https://masseffect.fandom.com/wiki/UNC:_Dead_Scientists?oldid=510396"
Community content is available under CC-BY-SA unless otherwise noted.