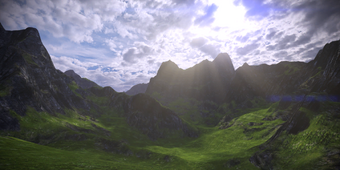 You have received a generic distress call coming from a small research facility founded by ExoGeni in the Maroon Sea Cluster.

Alternative journal entry:
You found a confidential transmission while on Feros. It's unclear exactly what's going on, but it appears ExoGeni sent some kind of sample to a research facility on Nodacrux.

You can receive this assignment after landing on Nodacrux if you missed it after completing Feros.

To obtain this assignment on Feros, decrypt a console in the cargo bay of the ExoGeni facility. This gives the Investigate Facility assignment, which then updates to UNC: ExoGeni Facility upon traveling to Nodacrux.

Expect a standard fight against organics in an interior environment. Equip the Anti Thorian Gas acquired on Feros back into your grenades: ExoGeni has been doing some less than savory research here.

Land on Nodacrux, which is located in the Vostok system of the Maroon Sea cluster. Upon landing, you'll notice some enemy signals on your radar. There are Thorian Creepers scattered throughout the area. You don't have to do anything about them, but they're easy enough and there are lockers nearby for you to loot. Whether you ignore them or kill them, head to the exclamation point on the map. Be advised, the base is quite hard to get into, given the steep mountains surrounding the entrance. If you approach from the south, there is a road with switchbacks providing easier access to the facility.

Enter the facility, grab the Upgrade Kit on the table ahead of you, and then proceed to wipe out all the Creepers, which isn't that difficult. Keeping near the door and letting them come to you is a good idea. You can also let them come and then backpedal into the entrance room, funneling the Creepers into a bottleneck, making them easy prey. When the Creepers have fallen, head to the back of the facility to rescue the scientists who are holed up in the room to the left. Before talking to them however, the room on the right has two Storage Lockers requiring only easy decryption, a Sludge Canister, and a crate with loot, be sure to grab them before heading over to the other room to get what you came for, and some answers. 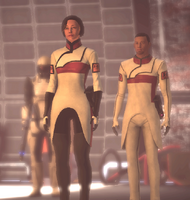 You begin listening to Doctor Ross, who is in charge of this facility and now you can demand some answers. Once you tell her about what you did on Feros, Ross will stop lying and tell the truth. In order to avoid Shepard reporting them to the authorities, they will attempt to bribe you; if you reject their offer and instead attempt to arrest the scientists, they - and a group of mercenaries - will fight you.

Before leaving the room, be sure to grab the Technician Kit, the Wetware Kit, the loot from the Malfunctioning Object, and the Medi-gel from the Aid Station. Also be sure to grab the crates in the other room if you bypassed them earlier. Note: If you accept the bribe, you will end up outside of the facility unable to search the room. So if you are going to accept the bribe, search the other room for equipment first.

Retrieved from "https://masseffect.fandom.com/wiki/UNC:_ExoGeni_Facility?oldid=467677"
Community content is available under CC-BY-SA unless otherwise noted.