1 of 3
Helena Blake, a high-ranking member of a criminal cartel, has asked you to eliminate two of her unpleasant compatriots. Their bases are located in the Han and Dis systems. After eliminating them, meet Ms. Blake in the Fortuna system for a reward.

Alternative journal entry:
C-Sec is investigating a woman by the name of Helena Blake. They seem to think she is involved in some major criminal activities.

Once Shepard becomes a Spectre this assignment can be obtained in one of two ways.

“PERSON OF INTEREST
C-Sec is investigating a woman named Helena Blake. There's no hard evidence against her, but if these reports are correct, she's a powerful criminal element on the Citadel. She was last seen near the Emporium on the Presidium.”

You'll face a wide variety of mercenaries on this assignment, including krogan. A mixed squad will probably work best, and you can adjust your squad for each planet if desired. There's a fairly high mix of snipers, so armor mods that provide additional shielding or damage protection make sense for surviving their one-shot attempts.

Because almost all of these enemies can regenerate and use Immunity on higher difficulties, it may be best to save this assignment until you have reached level 30 or so - that way you'll face them with better equipment and more powerful abilities. At least one opponent can use neural shock on Shepard - thankfully, not often - but expect to fall over on the floor at least once while someone shoots at you.

In terms of squadmates, ones who take and do a lot of damage really quickly, like Wrex or Ashley, are useful here. Weapon mods that prevent regeneration and increase damage work here.

One of the visitable environments in this assignment may require anti-hazard armor if you intend on spending time away from the Mako.

When spoken to, Helena Blake explains that she is a high ranking member of a criminal cartel and wants two crime bosses and their operations eliminated. They're red sand dealers who trade any defaulting customers to batarians as slaves, a business practice of which Blake disapproves. Once they're dead she will manage their organization "more tastefully".

Regardless of whether you accept her offer or not, Blake will give you the coordinates to her partners' bases. Morality points are available depending on your behavior.

Note: If you already acquired the assignment from Blake herself, the alternative assignment acquisition terminal at the C-Sec office becomes inaccessible, which means the loss of a few experience points. To maximize gains at this time, acquire the assignment by decrypting the terminal first, then speaking to Blake for those morality points.

The crime bosses - who are not named - are located on two different planets. The first is found on the planet Mavigon of the Han system in the Gemini Sigma cluster. The second is on Klensal of the Dis system in the Hades Gamma cluster. 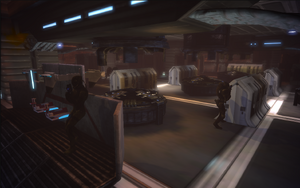 The base on Mavigon is located on a high cliff in the southeast corner of the map. The base itself is defended by three heavy turrets. Take these down at a distance, or lower their health and then take them out on foot for more exp. Remember that Mavigon is a Level 2 Cold Hazard (incorrectly labeled Level 1 in-game) so be careful when exiting the Mako and watch the bar in the lower right hand corner of the screen. Once you are in clear, enter the base.

The base is a science station layout so the entryway is clear. Once in the entryway grab the medical kit and move through the hallway to the main room, save your game if you wish. The main room holds 5 regular mercs, 2 Snipers, and the Crime Boss. Usually, the first ones coming at you are a couple of krogan mercenaries so hold your squad back until they have been dealt with. Note: On higher difficulty levels the snipers can one-shot you so keep an eye out for them and especially their red laser sighting beams.

There is plenty of cover around so use it to your advantage and eliminate the enemies; you can often lure a few mercenaries at a time back to the enclosed area near the entrance of the main room. The crime boss has a habit of hunkering down behind the bunker wall defense structure at the other end of the room so you may have to move around in order to get to him. Once they are all down you will receive a congratulatory message.

Once that's done, grab another med kit on the pillar and head to the two back rooms with loot. The room on the right holds a technician's kit, malfunctioning object, a secure crate (average Decryption) and two more med kits, while the left room holds a wetware kit with biotic amps and a medical station (easy Decryption). Once you have collected your reward head back out and return to the Normandy to take out the next base.

The base on Klensal is located near the center of the map near a Platinum Deposit. The exterior of the base is defended by 3 regular mercs and 3 snipers, two of which are in towers above the battlefield. Kill them first, then focus on the other mercs. Once you have taken them all out move into the base. 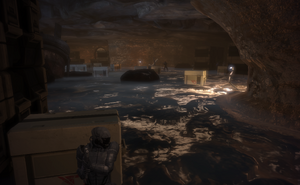 This base here is a mine so move down the entrance tunnel and onto the first landing. The base itself has the same amount of mercs as the base on Mavigon: 2 snipers, 5 regular mercs, and the Crime Boss. The center of the mine as usual has crates all around it, but no containment cells. Take cover near the entrance to avoid being flanked. Just watch your right.

Once you have taken care of the cronies, the crime boss here will stay behind the large crate near the tunnels at the back. Use anything you can to get him out. When he falls, go to the last two tunnels.

The left tunnel is blocked by a drill, so there isn't anything for you. The right one, however, holds two regular weapon lockers and a secure one, requiring basic and average Decryption respectively. There is also an aid station (+2 medigel) and a fire containment cell. On your way out grab the medkit on top of the crate near the chamber entrance and the upgrade kit behind a stack of crates in front of the two tunnels. Once everything is in hand, head out and back to the Normandy for the final part of this mission.

Note: The crime boss can sometimes spawn inside the rear wall near the two lower tunnel entrances. Singularity will successfully pull him out of the wall, and though he may remain unanimated, you can kill him and complete the mission.

Once the bases are cleared, head to the planet Amaranthine in the Fortuna system in the Horse Head Nebula to find Blake. 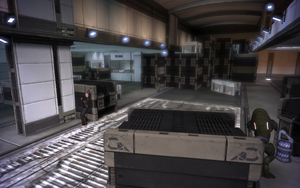 The base itself is in a crater at the south of map. Once you enter the base, the two-story type, and open the first door, Blake will be standing there. She will thank you and assure you that the gang will now restrict itself to gambling and smuggling illegal technology, crimes that aren't worth your trouble.

If you accept Helena Blake's reward, it results in you being escorted out of the facility and the door locked behind you. If you attempt to arrest her, she and her mercenaries will attack you. Otherwise, with a high Charm (10+ Paragon) or Intimidate (9+ Renegade) score, you can convince Blake to disband her gang permanently. If you chose one of the disbanding options then tell her you are going to arrest her, you can get the morality points and still get to kill everyone.

If you choose to attack, a purple barrier will erect preventing you from shooting her immediately and block your access to the interior until you shoot it out. The defenses are the same here as the other two bases, save for Blake instead of the crime bosses. Use the cover just ahead of the door to take out all the mercs. A dialogue box will show saying that Helena looks up at you, smiles from a pool of her own blood, tries to say something and then chokes on said blood, and dies.

As usual, there will be plenty of loot in the compound. The main room only has a medical kit and an upgrade kit behind the crates at the end, but if you go up the stairs to the walkway above you'll find a secure weapons locker (average Decryption) and a room at the end with a technician's kit, an aid station and a hardened wall safe (hard Decryption)

Note: You can still loot the complex even if you convince Helena to break up the organization.

If you didn't kill Helena Blake and her gang, she can be found in the lower level of Afterlife Club on Omega. If you persuaded her to disband her gang, she is now a social worker and will thank you. If not, she mentions she merged her gang with Aria T'Loak's organization.

Retrieved from "https://masseffect.fandom.com/wiki/UNC:_Hostile_Takeover?oldid=518309"
Community content is available under CC-BY-SA unless otherwise noted.