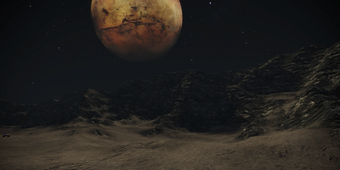 Major Kyle, an Alliance officer who served during the Siege of Torfan, has amassed a small but fanatical group of biotic followers. He has already killed two Alliance officials sent to investigate their compound in the Hawking Eta cluster.

Alternative journal entry:
Major Kyle, your CO during the Siege of Torfan, has amassed a small but fanatical group of biotic followers. He has already killed two Alliance officials sent to investigate their compound in the Hawking Eta cluster.

Alternative journal entry:
You discovered a strange transmission discussing some sort of biotic commune. On the whole it seems harmless, but something about the message is a little disturbing. 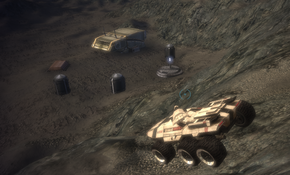 This assignment can be acquired in four ways:

Admiral Hackett gives Shepard the details on a former Alliance officer named Major Kyle, who has become the leader of a biotic commune. A former marine suffering from post-traumatic stress disorder, Kyle has set himself up as 'Father Kyle' and gained a number of followers, mostly biotics looking for someone who will champion their cause. Hackett explains that two Alliance officers were sent to talk Kyle around, but they've now disappeared and Hackett is convinced Kyle's followers killed them.

He now needs Shepard to intervene. If Shepard has the Ruthless background, Major Kyle was Shepard's commanding officer at Torfan, making Shepard the logical choice to speak with Kyle.

It's possible to get through this assignment without doing any fighting, but should a fight arise you will be facing roomfuls of lightly-armed but dangerous biotic opponents.

The combat zones have the typical indoor prefab layout, littered with cover and obstacles. The only real threat over your head is heaps of disables hitting you and your team at once. Consider a focus on higher hardening and physics threshold stats: armor mods like the Combat Exoskeleton for added protection against kinetic Throws and related talents.

Head to the Century system in the Hawking Eta cluster. The mission takes place on Presrop, the moon of Klendagon. When you reach the compound on Presrop, you will see two buildings. Head for the prefab two-storey building, since the underground bunker only becomes accessible later. There is a small room on the side of that compound with a med kit if you need it. 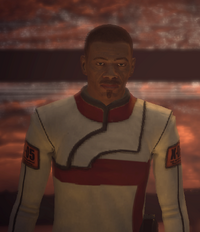 When you try to open the door of the first building, you will initiate a conversation. If you choose to ask for the man in charge, you may be able to avoid bloodshed. You must have a high Charm or Intimidate stat to select this path, or you must have selected the Ruthless background so that Kyle already knows you.

The speaker will ask you to head to the other facility to speak to 'Father Kyle'. Enter the complex, and head to the back to speak with Kyle. While they tell you to go to the far building, you can still enter the first building and loot all the containers. No one will attack you and you can talk to the biotics, but if you shoot any of them, everyone goes hostile. This also causes everyone in the second building to go hostile, but you don't have to open the second building from the first like you would if you just stormed the first from the start. You do not get any morality points from shooting people in the first building, even if you went in with the Charm option.

If you try to bludgeon your way in at the first building, they will become defensive. You will have to hack the door, at which point they will raise the alarm. Should you choose to fight, inside the first complex you will find limited cover, multiple explosive containers, and eight Biotic Cultists. The Cultists aren't heavily armed, but their biotics fortify them and can knock you down for prolonged periods of time, making this a challenging encounter. The best way to deal with them is to keep on the move here: not only will it keep them off guard, but it will also give you a chance to avoid their biotic attacks, while employing your own abilities; use those containment cells to knock a few down, and sometimes out of the fight permanently.

When you have defeated the Cultists, or managed to talk them down, loot the facility. There is a Technician Kit and a Malfunctioning Object in the room at the back on the lower floor. The room on the upper floor contains the unlocking console, (if you chose to fight your way in) along with a Medical Kit and an Aid Station. Back on the main floor, there is a locked crate (only easy Decryption) about two-thirds of the way back in the center, behind some tall crates. Finally, there is another locked crate with the same level of security in the entrance room off to the left behind the stacks of crates. When you have everything, head for the other compound.

If you chose to fight, then be prepared because you will encounter hostiles in the first room. Two Cultists are here, and will sometimes make a break for the door into the main room, don’t let them get in there because that will just make more that you have to deal with. When you have dealt with them, head into the main room and be prepared to fight five more Cultists. Just like in the other complex, they are fond of using their biotic powers, so staying on the move is a very good idea. When the main room is clear, the Cultists here usually don’t run, there is a Medical Kit on the pillar to the right of the entrance door, a Storage Locker (easy Decryption as well) near the pillar heading further into the facility, and an unlocked crate off to the left of the main room, near where you entered from outside.

Head towards the back of the facility, and head left to find two more Cultists. When they are down, loot the room, it has a Technician Kit and a Malfunctioning Object, then head to the other room to talk to ‘Father Kyle’. Kyle knows why you have come, mentions that he has no quarrel with you, and asks why they can’t be left in peace. If Shepard has the Ruthless background, Kyle recognizes the commander and addresses Shepard as "the Butcher of Torfan". Kyle is unrepentant about the deaths of the Alliance officers, claiming they spoke 'blasphemy' and tried to make him abandon his 'children'.

You can just attack Kyle, but then you must fight through the biotics outside. If you choose this option, then Kyle will be instantly killed, but the two Cultists in the room, and any others in the building (assuming you didn't shoot your way in) will attack.

Warning: When the conversation with Kyle ends with Shepard shooting him, you'll suddenly find yourself holding a pistol, whether or not that is your normal weapon. While this would be fine if it worked as well on the Cultists as it does in the cutscene on Major Kyle, suddenly holding a weapon you haven't trained with, upgraded, etc, while Cultists suddenly start launching rockets and biotic attacks at you can come as a bit of a surprise. Be ready!

To get out alive, keep moving and keep shooting until you reach the door. Like the other ones, they are armed with only pistols, but their biotic attacks can leave a lasting impact, so keep moving to avoid them. When you get out, you have the option to attack the other facility, if you want the experience points, but otherwise it isn’t necessary to finish the assignment.

If you give him the hour, he is picked up at the gates of his compound without further incident. Otherwise the cultists won't understand what's happening and turn violent, forcing you to kill them all. You still have to walk out of the facility, but if you shoot any of the Cultists, they turn hostile and you will need to shoot your way out. If you want this to end peacefully, just keep walking out, and it might be best to put away your guns to avoid an accidental misfiring that will result in you fighting your way out.

This assignment ends by returning to the Normandy; Shepard is debriefed by Admiral Hackett contacted upon using the Galaxy Map.

Retrieved from "https://masseffect.fandom.com/wiki/UNC:_Major_Kyle?oldid=518194"
Community content is available under CC-BY-SA unless otherwise noted.