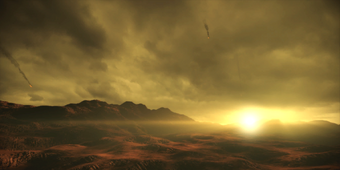 Admiral Kahoku has asked you to find a missing recon team in the Sparta System. All contact with the team was lost shortly after they were sent to investigate suspicious activity in the area.

Alternative journal entry:
You encountered a distress beacon when you entered the Sparta System. Someone there may need assistance.

There are three ways to gain this assignment: 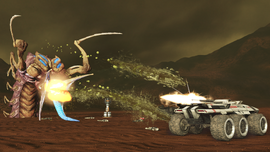 Land on Edolus and follow the "distress call" marked on your map, which is directly north of your landing zone, until you find a M29 Grizzly, several dead marines, and a transmitter. Approach the site slowly and cautiously because as soon as you get close enough, you will be attacked by a Thresher Maw. Be aware, and do not draw too close in the Mako or else the Thresher Maw will most likely crush you.

Deal with the Thresher Maw either on foot or from the Mako from a distance, avoiding its projectile globs of acid spit. As usual, damaging it with the Mako then killing it on foot (along with other Mako-appropriate tactics) will translate to more experience points. Once it's dead, your team will comment that someone deliberately placed the transmitter there and lured the marines to their death. Examine one of the marines for a codex entry if you haven't gone to Noveria or for story reasons if otherwise, and go back to the Normandy.

Return to the Citadel Tower and speak to Kahoku to complete the assignment.

Retrieved from "https://masseffect.fandom.com/wiki/UNC:_Missing_Marines?oldid=510623"
Community content is available under CC-BY-SA unless otherwise noted.