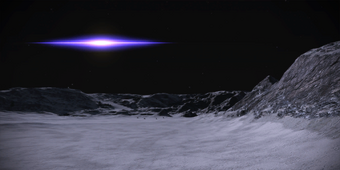 A rogue VI has taken over an Alliance training ground located on Earth's moon. Alliance Command needs you to eliminate the VI and reclaim the facility.

This assignment is triggered after reaching level 20 (or level 11 in Mass Effect Legendary Edition with Legendary Mode) when next traveling to another system. Admiral Hackett asks for Shepard's assistance in disabling a VI at an Alliance training ground on Luna, which is no longer responding to shutdown commands. The Local Cluster and Sol system will immediately become accessible.

You will be fighting mostly synthetic drones on this mission, which are largely immune to physics-based biotics. You will want to choose a squad heavy on tech powers such as Sabotage, Overload, and especially AI Hacking; Tali's engineering background makes her an especially strong squadmate here.

Tip: Strategically this is a great mission to do as soon as you get it, as it will unlock Shepard's specialization class. 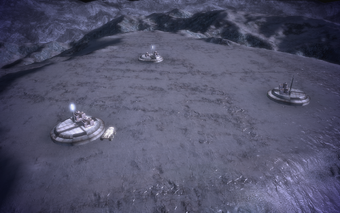 Travel to Luna (Earth's moon) in the Sol system, Local Cluster. Consult your map to determine your location and route to the facility, and travel there. Be aware that there are two turrets on the rooftop of each of the facility's three bunkers. Although taking them out is NOT necessary to complete the assignment (you can enter the bunkers with the turrets active and they will automatically shut down once you clear out all three bunkers), the additional experience from knocking them out is worthwhile. Attacking from a distance is advisable, as this increases the chances of being able to dodge the rockets. Alternatively, you can circle strafe around each set of turrets while firing at them. Another strategy to defeating the turrets is to take out a set of turrets and then hide behind that bunker while firing at the turrets on another bunker.

Once you have gotten past the turrets, pick a bunker and start clearing them. It doesn't greatly matter what bunker you choose, as the defenses are mostly dependent on the order in which you enter them, not on their geographical location or difficulty level. The only thing that changes is the location of loot: each bunker has a secure crate and a secure storage locker (both requiring average Decryption) in the first room, but their exact positions vary from bunker to bunker. Legendary Edition: The northeast bunker contains a rocket drone and the other two initially do not.

Each time you take out a system of VI Conduits, a new defense mechanism is activated. 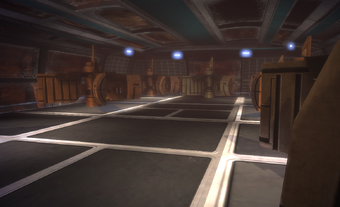 When you enter the main room the drones will not attack until they see you. In the original Mass Effect this bunker will contain nine Advanced Assault Drones; in Legendary Edition it will contain five drones (one will be a rocket drone if you picked the northeast bunker), though you may find they storm your positions more aggressively than you were accustomed to in the original trilogy. If you get overwhelmed, which is easy in this mission, and can happen very quickly, backpedal into the entry room; sometimes the drones follow and sometimes they don't -- though in Legendary Edition they almost certainly will. You can also destroy the four Power Junctions in each corner to damage the nearby drones. Once they're all down, move to the back rooms and shoot the VI Conduits in the back rooms. There are four in each room, so make sure to take out all eight in each bunker. Scan a data port in the first room you enter for a Codex entry. 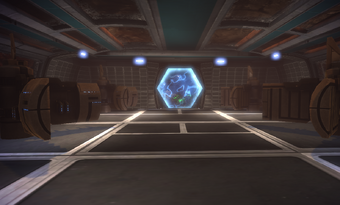 In the original Mass Effect there will be seven Advanced Assault Drones and two Advanced Rocket Drones in the main room; in Legendary Edition there will be five drones (one will be a rocket drone if this is the northeast bunker). Again, if you get overwhelmed, or start to get overwhelmed, then backpedal into the entry room. As with the first bunker, sometimes they will follow and sometimes not, if you're playing the original trilogy -- in Legendary Edition they'll almost certainly follow you. Once they all fall head to the back rooms for the next eight conduits.

Defense Activated: Kinetic barriers are erected over each doorway and over each of the VI Conduits. 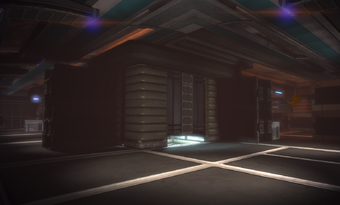 When you enter this bunker, you are in for a much harder fight. This is complicated by the fact that sometimes you cannot save once you enter the bunker; it is unknown if this is a bug. It may be due to being in combat even if the enemies are not actively attempting to get to you. If you have the option of saving, it is recommended that you do so, considering the difficulty. If you cannot, exit the building or get away from enemies, save, and then reenter.

Legendary Edition: Due to how aggressive the drones behave in Legendary Edition, they will relentlessly chase Shepard and get stuck on the kinetic barriers. You can shoot the barrel of the drones from a distance to destroy all but the last one with ease. Do not approach the barriers, or the drones will start firing and will destroy the barriers and then you. Sometimes the last drone will not come to the barrier. On higher difficulties, it is advisable to place your squadmates close to the barrier and destroy it, so it targets them first, allowing you to whittle it down from a distance.

When you have saved, open the door to the main room. In the original Mass Effect you will find four Advanced Assault Drones and five Advanced Rocket Drones, and these will be spread out around the main room as usual. In Legendary Edition there will be two Advanced Assault Drones and four Advanced Rocket Drones, and they will all be clustered right at the entrance to the main room where they are vulnerable to an initial burst of tech powers such as Overload, Sabotage, and/or Hacking -- as well as grenades. These drones will frequently follow you into the entry room if you get overwhelmed. If you do, remember that the entry room for each bunker contains Power Junctions, which can explode and damage the drones after enough damage. The main room will contain them as well. If possible, try to engage only a few drones at a time. Once all the drones have fallen, head to the back rooms and take out the final eight VI Conduits.

Alternatively, if you're playing the original version of Mass Effect, you can use Barrier or Immunity on yourself and your squad, make a dash for the back rooms and take out the first four VI Conduits in the room to the left. You will only need to destroy three Advanced Assault Drones in the room to the right with this strategy, before destroying the final four VI Conduits. Once all of the VI Conduits have been destroyed, all remaining drones will be destroyed.

Once the mission is complete, you will be presented with a text dialog depicting the VI's final moments after which you will be rewarded with a specialization class. See below for the translation of the message.

Converting the binary to ASCII reveals that the message reads 'HELP'.