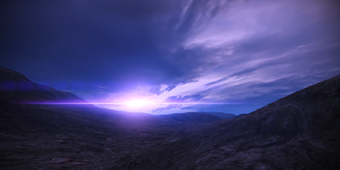 Admiral Hackett has asked you to negotiate a treaty with a man named Darius in the Plutus System system [sic]. The treaty concerns mining rights on an asteroid rich in Element Zero. You are authorized to make any financial or diplomatic concessions necessary to secure mining rights to the asteroid.

This assignment only becomes available when you have hit 80% Renegade, or 90% Renegade if you had attained 80% Paragon first. The rendezvous point is set on Nonuel, in the Plutus system of the Hades Gamma cluster.

Although as the name indicates this assignment can be accomplished through negotiation rather than combat, if you decide to fight it out you'll be facing nine powerful enemies: three krogan, and six other organics armed variously with sniper rifles, shotguns, and assault rifles. The tight quarters of the fight will tend to favor shotguns over sniper rifles for your squad, and crowd control abilities to disable foes will be at a premium. If they're around, Wrex and Ashley are quite useful since they can go toe to toe with a krogan and walk out of it alive, and if Liara's around, the temptation of simply sucking everyone into a little group and then using an area of effect ability to damage them all at once is quite attractive. 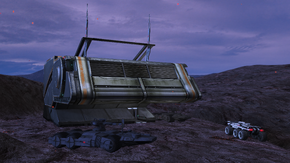 When you land on Nonuel, travel to the Warlord's Outpost on the planet. Watch out for the lava on the planet because if you even touch it the Mako will be destroyed. When you enter the base, head to center of the room to begin talking to 'Lord' Darius. Darius will begin the negotiations on the offensive, clearly angered by the Alliance's decision to send Shepard rather than a trained negotiator; if Shepard is female, Darius is somewhat more insulting.

If you want to pursue a peaceful solution with no hassle, it is the safest to choose only the uppermost replies. You can choose a renegade or neutral option before he asks you to say "please" (at which point a non-paragon response will result in a gunfight regardless of if you have been totally paragon so far) which will result in him angrily objecting, saying the Alliance owe him and he deserves respect. You can then learn how the Alliance set him up in the region to stabilise it after the batarians were driven out. You must apologise at this point to continue negotiating; any more renegade or neutral replies will devolve the negotiation into a firefight.

If you choose the paragon path, Shepard apologises on behalf of the Alliance for mining on "his" asteroid and eventually you negotiate a deal with Darius; he requests that he be paid with money, eezo and equipment to produce red sand in return for allowing Alliance miners to mine his asteroid. His final demand is that Shepard "ask him nicely" to work with the Alliance; if you do, he allows you to leave.

If you wish to fight, or if you have finally had enough of Darius's attitude, select a lower dialogue option. When you regain control of Shepard, it's highly recommended to immediately use an Overload on Darius as it will detonate the containers on his balcony which may immediately (and humourously) blast him off it and allow you to take him out quickly. The eight Retainers and Darius himself will cut you and the squad down quickly if you choose to stand in the center of the very large room, so find some cover.

Although Darius' cronies are all generically labeled "Darius Retainers", they come in several flavors including two with sniper rifles. The rest will use shotguns and assault rifles depending on range, and the three krogan retainers will aggressively seek to close to point blank range. All of the enemies can regenerate health as well as shields, so your best bet is to concentrate overwhelming force to eliminate one enemy at a time, gradually simplifying the fight.

One bold move is to head straight for the balcony, killing or disabling anyone in your way, then use the staircase as a bottleneck to take care of the rest. The doorway to the entry chamber can likewise serve as a choke point, though you will be unable to exit the base proper until the fight is complete. Both the balcony and the entry chamber offer cover positions to fall back to. The corner opposite the entry door also offers cover, and indeed the main room is chock full of obstacles if you prefer a mobile defense, but you'll always need to be alert for flankers. 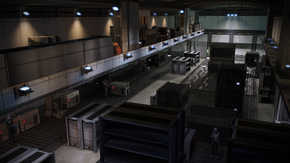 Once you've dealt with Lord Darius through either negotiation or violence, check around the room for crates. There's a Malfunctioning Object crate at the ground level, in the room off the main hall. There are two upgrade kits on the shelves on either side of where you conversed with Darius.

You will receive morality points depending on how you dealt with the mission upon conclusion of the talk with Hackett.

If Shepard successfully negotiates a contract with Darius, during the debrief Hackett will reveal that he expected Shepard to kill Darius instead, but will follow through with the treaty anyway.

If you chose to kill Darius, you can choose your responses to Hackett. It is obvious that this was a setup but Hackett and the Alliance cannot officially condone such actions. Given that an 80% Renegade score is needed to unlock this assignment, it is logical for Hackett to make this assumption.

Retrieved from "https://masseffect.fandom.com/wiki/UNC:_The_Negotiation?oldid=460467"
Community content is available under CC-BY-SA unless otherwise noted.