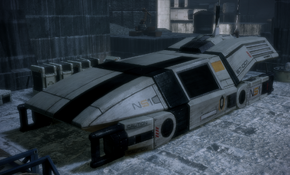 The UT-47 Kodiak Drop Shuttle is a personnel carrier capable of planetary flight and is capable of limited FTL travel. The shuttle is used extensively by (but not limited to) the Systems Alliance and Cerberus in 2186. The Kodiak and several variants have also seen extensive use in the Andromeda Galaxy's Heleus Cluster by the Andromeda Initiative nearly 600 years later.

Nicknamed the "Combat Cockroach" by Alliance marines due to its durability and looks, the Kodiak drop shuttle is an interplanetary vehicle operated by a pilot and a co-pilot. It can carry up to 14 people, including the pilots, with a total of 12 in a cramped cargo space with full complement, as well as a VI. A true contragravitic vehicle, the Kodiak's substantial Element Zero core allows flight by entirely countering the vehicle's mass. Its small thrusters are for directional control only, so if the mass effect field fails, the vehicle becomes a proverbial "three-million-credit coffin". The unarmed shuttle forgoes weaponry-space for active masking, electronic countermeasures, and a robust kinetic barrier system.

The Kodiak was extensively tested in the sulfuric acid and extreme temperatures of Venus, and can land in hard vacuum, high pressure, and temperatures from near-absolute zero to over 900 degrees Celsius.

The larger mass of the Normandy SR-2—nearly twice the mass of the original—meant that it could not land on the surfaces of most planets with ease and had to be provided with one of these shuttles for ease of travel.

The Normandy SR-2 holds a Kodiak in its hangar bay. Commander Shepard and their team use the shuttle for ground missions throughout their fight to stop the Collectors.

During Shepard's mission to the batarian prison on Aratoht, at the request of Admiral Hackett to liberate a friend, Dr. Amanda Kenson, the two manage to steal a Kodiak from the prison hangar to make their escape. The shuttle is painted black and red with a batarian logo. Several Kodiaks are later used to evacuate the Project Base by members of its staff. 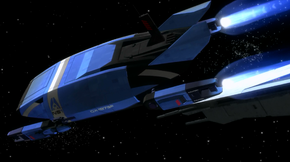 Four of these shuttles are deployed by the Alliance to respond to the Blood Pack's attack on Fehl Prime in 2183. In contrast to other variants, the vehicles' curves are longer with fewer straight edges except for the four movable thrusters and two ailerons mounted to the dorsal hull in the rear. The ventral-mounted thrusters have been removed and the shuttle needs to use the movable thrusters to land. The front of the shuttle also sports two pairs of headlights.

The mass accelerator cannons are more side-mounted and can rotate 360 degrees, allowing the pilot to fire at targets to the shuttle's rear. Because this would block the side doors, entry into the shuttle is from a rear and forward hatch. The shuttle is big enough to carry a dozen soldiers and has lockers for their equipment.

The shuttle is very maneuverable and capable of dishing out heavy firepower. However, it's quite vulnerable as a single missile from an ML-77 Missile Launcher is capable of blasting through the shuttle's hull and possibly even destroying it. This contrasts heavily with a variant seen in 2186, where the Kodiak is hit with several missiles on Rannoch without suffering any major damage. 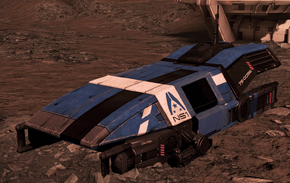 By 2186, a variant of the shuttle known as the UT-47A or A-model Kodiak can be seen and used in various locations and situations. The Normandy SR-2 holds two UT-47A in its hangar bay. The Systems Alliance uses several shuttles to evacuate civilians during the Reaper invasion of Earth. These shuttles are painted blue and white with the Alliance logo.

The A-model is equipped with a pair of front-mounted mass accelerator cannons that can be used to attack enemy vehicles and buildings. It also has an upgraded eezo core and prototype stealth technology based on the Normandy design. The UT-47A is rated at 1000 atmospheres, or 6.42 miles, and in theory could withstand the pressures of a deep sea dive. This, however, has yet to be tested in the field.

Kodiak shuttles are also used by C-Sec. During an attempt on Commander Shepard's life, one of these shuttles is hijacked by members of the CAT6 mercenary group and used as part of an ambush. The shuttle is subsequently destroyed either by Urdnot Wrex slaughtering its occupants or James Vega firing a Cobra Missile Launcher at it.

Some of the UT-47 Kodiak Drop Shuttles were acquired for the Andromeda Initiative project. They were deployed in the Heleus Cluster of the Andromeda galaxy in 2818. A few shuttles however were stolen by the exiles after the uprising on the Nexus and found their use on Kadara.

Retrieved from "https://masseffect.fandom.com/wiki/UT-47_Kodiak_Drop_Shuttle?oldid=516722"
Community content is available under CC-BY-SA unless otherwise noted.