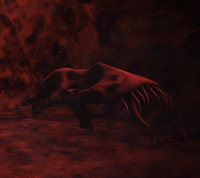 A skull belonging to an unknown creature can be found in the Armstrong Nebula on the planet Maji orbiting Vamshi. This "odd skull" can be found in between the crashed probe and the ancient debris.

According to Commander Shepard's hardsuit computer the skull does not match any species in its xenobiology database. Apparently the skull shows signs of injury from heavy weapons fire, so the creature might have been brought to Maji as part of the 'death match' entertainment practiced by pirates from the Terminus Systems.

Retrieved from "https://masseffect.fandom.com/wiki/Unknown_Creature?oldid=524076"
Community content is available under CC-BY-SA unless otherwise noted.