Mass Effect 2 (conditional)
Mass Effect 3
Urdnot Wreav is Wrex's broodbrother, both of them having shared the same mother. He becomes the leader of Clan Urdnot if Wrex dies in Virmire. He is more traditional than Wrex, placing the importance on his own clan over the krogan race as a whole.

Shepard first meets Wreav in Tuchanka. He expresses gratitude to Commander Shepard for killing his brother, as it has led to him becoming leader of Clan Urdnot. Wreav is a traditional krogan, preferring war to peace, and doesn't have as much trouble as Wrex would have had with Gatatog Uvenk.

After completing Grunt's loyalty mission, he permits Grunt to join his clan.

If Wrex survived Virmire, Wreav will not make an appearance.

“Those females are immune to the genophage, and they belong to me!” 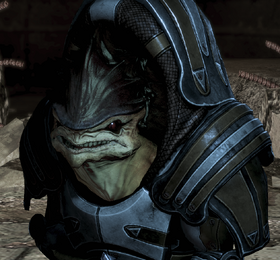 If Wrex is Clan Urdnot leader, Shepard meets Wreav for the first time in the Hollows, the sacred neutral ground for all krogan, during their attempts to cure the genophage. Wreav objects to the presence of Mordin Solus, or Padok Wiks if Mordin is dead, even when it is mentioned that he was going to cure the genophage, until Wrex headbutts him.

During the land assault against the Shroud facility, where a Reaper was standing guard, Wreav's tomkah was sunk by Kalros, the mother of all thresher maws. He is believed to have died, to the indifference of Wrex, who comments that "he was always a pain in the ass".

If Wreav is clan leader, he will be much more traditional and aggressive than Wrex. For example, while Wrex is very respectful to Eve, Wreav treats Eve as his property and thinks of Eve as a "nag". Another example of this traditional, krogan mindset is his racist sentiments directed at various turians and salarians. His place as second-in-command is filled by Jorgal Thurak.

After Wreav is invited aboard the Normandy for the first time, Shepard finds out from Liara through Glyph that Urdnot Wreav has commissioned more weapons of mass destruction than any other krogan in known history, and has already used some of those weapons against other clans. However, Clan Urdnot still has a stockpile of conventional weapons despite Wreav's focus on weapons of mass destruction.

Also, Wreav's strategy for negotiations with the galaxy at large is to use force and intimidation as useful tools; if he threatens to have his krogan forces pay an alien planet a visit, for example, he doesn't have to actually follow through, knowing that merely the threat of krogan invasion will force others to listen and take the krogan seriously.

He is constantly seeking to turn situations to his vested advantage or the vested advantage of the krogan; once the genophage is cured, Wreav immediately takes the credit for it and spreads stories across Tuchanka of the day Wreav cured the genophage, which Wreav knows will cause all krogan to immediately respect him as the ultimate authority. Even when Wreav's forces show up at the final battle on Earth, Wreav can be overheard giving orders to the krogan to cooperate with the other alien forces but to use this opportunity to study their tactics and formations, implying that the krogan may have violent future intentions.

If Shepard did not reveal the sabotage and if Wreav is the Urdnot leader, Wreav never discovers that the cure had not been dispersed and is fooled into pledging support from his own clan and the rest of the krogan clans. In return for helping Dalatrass Linron to sabotage the cure, Shepard also receives backing from the salarian's First Fleet.

Retrieved from "https://masseffect.fandom.com/wiki/Urdnot_Wreav?oldid=414395"
Community content is available under CC-BY-SA unless otherwise noted.