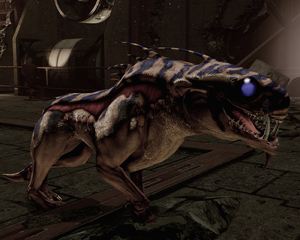 Urz is a somewhat docile varren which can be found near the merchant Ratch at Urdnot Camp on Tuchanka. Urz has a rare skin color, which may support theories regarding different breeds of varren. One of the passive conversations heard around the varren fighting pit nearby reveals that Urz's previous handler was exiled.

If Shepard assists Ratch with killing some vermin, free Pyjak Meat becomes available from Ratch's Wares and can be fed to Urz. After devouring the meat, Urz will start following Shepard around the camp and may be entered into the varren pit fight. Urz was a former champion pit fighter, and as such he has a high probability of winning and a corresponding higher bet: 500 credits instead of 250.

Should Urz lose a fight, he will relocate to the nearby med-lab and become temporarily unavailable for pit combat. Shepard's squadmates may comment on the varren's condition when prompted. If Shepard leaves the camp and the injured Urz behind, the varren will be be up and running again by the time the Commander gets back.