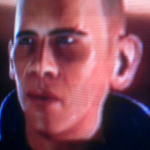 233 Edits since joining this wiki
December 11, 2010
0 Discussion posts
“He got most of his unit killed on Torfan.”

Barack O. Shepard was an Earthborn human Engineer in the Systems Alliance Navy who also briefly with Cerberus. He is notable for taking down the rogue Spectre Sarem Arterius as well as stopping the Collectors. His flagship was the SSV Normandy SR-1, until it was destroyed at which time it was replaced with the SSV Normandy SR-2. His personal pilot is Joker, who has served with him since the shakedown run to Eden Prime. His weapon of choice is his M-6 Carnifex and his M-8 Avenger.

Barack was born on Earth in 2154. As a teenager, he was involved with the Tenth Street Reds, a notorious gang.

During his time with the Reds, Barack was acquainted with Finch, one of the enforcers for the Reds. He helped the Reds secure their place as a prominent Gang, and was involved in several incidents that would give them the leverage to attempt to extort his assistance later in life.

After turning 18, he left the gang life behind and joined the Systems Alliance, serving as a soldier on the front lines, eventually rising to the rank of Lieutanent Commander and being identified as a candidate for Spectre status. Career

“Put the gun down and step away from the doctor slowly, or I will fire!”

In 2183 CE, Shepard was assigned to the SSV Normandy, the Alliance's most advanced starship. He initially started as Executive Officer to Captain David Anderson. As he waited for arrival at Eden Prime, he talked with the Spectre Nihlus, who told him he would be a prime candidate for the Spectres. Unfortunately, the mission to Eden Prime was a disaster: Nihlus was kiled, and the Prothean Beacon they had been sent to recover was destroyed.

With the mission to Eden Prime deemed a failure, Barack was determined to prove that Saren had attacked the colony. He recruited the help of Garrus Vakarian, a Citadel Security Officer. WIth Garrus' help he tracked down Tali'Zora Na Rayya, a young quarian, who had evidence of Saren's actions. With the evidence in hand, after a full on assault on Chora's Den, and a brief but intense firefight in a back alley, Barack proved to the Citadel Council that Saren had betrayed them.

After proving Saren had betrayed them, the Council took action: they named Barack Shepard the first human Spectre, an unprecedented move. He was immediately tasked with bringing the traitorous turian Spectre to justice. The Mission to bring down Saren

Shepard headed for Noveria first, after being informed that Matriarch Benezia, Saren's second-in-command, was seen there. As he made his way through the local port, he became bogged down by red tape. After finally making it out of Port Hanshan, he headed for Peak 15, one of Noveria's many research facilities. He eventually found his way to the VI Core and managed to reactivate Mira, the Station's VI. He reactivated the facilities damaged systems and made his way to another labratory. He met Captain Ventralis, hired by Elanus Risk Control Services to protect the scienticsts. He eventually found Matriarch Benezia, and after an intense shootout, she died, but not before giving him the location of the Mu Relay.

Upon arrival at Feros, Shepard and his crew found it quiet. They made their way to a small camp, Zhu's Hope, where a few survivors were fighting back regular geth attacks. Once he secured Zhu's Hope, Shepard headed for the ExoGeni Facility, which had been overrun and heavily damaged by the geth. He eventually learned that the Colony, Zhu's Hope, was a control group to test the powers of Species 37, AKA the Thorian, an aceint, sentient plant. He returned to Zhu's hope, killed the colonists, and destroyed the Thorian.

Upon his return to the Normandy, Shepard learned that the Council wanted an audience with their newest agent; they had an update for him, new information they hoped would be useful. They informed him that a salarian Special Tasks Group (STG) had been sent to Virmire, and had gone radio silent. Arriving on Virmire Shepard realized he would need to take a more subtle approach in his arrival. He dropped in the Mako and headed for the salarians' camp. Along the way he disabled an Anti-Aircraft Tower allowing the Normandy to land at the salarian base camp. He arrived to hear bad news: his approach alerted every AA Tower in a three-mile radius, and to make matters worse this planet was home to a Breeding Facility where Saren was breeding an army of krogan. Upon hearing this, Urdnot Wrex, one of Shepard's allies, was hesitant to destroy the facility.

Wrex was understandably upset, but after a tense confrontation, Shepard made him see reason: The krogan here weren't true krogan, they were slaves to Saren to be tossed aside when he was done with them.

With Wrex on board, Shepard proceeded with the plan: He'll bring a team in back while the salarian captain, Kirrahe, led a frontal assault. But the salarian had a difficult request: He needed a member of Shepard's Squad to help with the assault. After sending Gunnery Chief Ashley Williams with the Captain, Shepard and his team set out. Along the way they disabled a geth comm array, destoyed a Satalite Uplink, and destroyed a platoon of geth flyers. Once in the base, Shepard disabled the alarms, allowing the salarian team to proceed without trouble.

As he made his way through the facility, Shepard found an asari named Rana Thanoptis, who gave him access to Saren's private rooms. Satisfied, Shepard told her she better get a move on because he intended to nuke the facility. He then proceeded to Saren's private room where he discovered a second beacon. After downloading more information, he discovered that Sovereign wasn't just a Reaper ship; it was an actual Reaper.

On his way out, the geth began pressing the assault on Ashley and Kirrahe's team. He decided to go and help Ashley while Kaidan Alenko armed the bomb. As he approached Ashley's location, Kaidan radioed that the geth were overrunning his position. In a desperate move, he armed the bomb early. Barack was forced to choose: Save Ashley, the young, brave Soldier, or save Kaidan, the veteran biotic with plenty of experience. He ultimately decided to save Ashley. After saying his goodbyes to Kaidan and telling him to "die proud," he continued on to where Ashley was.

He arrived to see a scene of utter chaos. He quickly and efficiently dispatched the geth. Suddenly, Saren arrived. After a brief standoff, Saren was forced to flee as the nuke was about to blow. "Let's go!" Shepard shouted as he pulled Ashley and the salarians onto the Normandy. Flying away they got out of there just in time. On the planet's surface, Kaidan saw the Normandy fly away. Smiling, he shot a few more geth before the nuke blew up, killing him instantly.

Upon arrival on Therum, Shepard's team made his way through a winding path before discovering a mine shaft that housed a Prothean dig site. Upon discovering Dr. T'Soni, she humorously refused to believe Shepard was real, driven mad by her extended isolation. In order to reach Dr. T'Soni, who was trapped in a Prothean force shield, he was forced to activate an old mining laser. Unfortunately, the laser destabilized the ruins. He fought his way out, reaching the Normandy moments before the volcano erupted.

He now knew he must go to Ilos, the only Prothean world to escape the Reapers, to find the Conduit. As he explored Ilos he marveled at the wonders of the planet. However, he remained focused on the task at hand: finding the Conduit. After a meeting with Vigil, an ancient Prothean hologram, he found the Conduit: it was a Mass Relay. More than that, it led to the Citadel.

After going through the Conduit Shepard arrived - with a crash - on the Citadel, which was in ruins. As he went up in the Elevator, Saren disabled it. Forced to go outside Shepard fought across the vents and the exterior of the Citadel to reach an access hatch to the Council Chambers. He found Saren, now implanted with Sovereign's Reaper tech, Saren was more devoted then ever. Or was he? After some convincing, the rogue Spectre took his own life, making amends for his crimes. However, it wasn't over. Sovereign, having implanted Saren, took control of his body. After an intense fight, Saren was dead for good, and Shepard was a hero.

“I was only mostly dead.”

Months after the Battle of the Citadel, the Council sent Barack Shepard on a campaign to search for Geth holdouts. As the Normandy patrols, their long-range sensors pick up an unknown ship. Stealth systems are engaged, meaning they would need to get close enough to make visual identifcation. However, the vessel switches course to intercept them. Joker orders everyone to brace for evasive maneuvers. However, try as he might, he is unable to avoid the beam. Barack pulls on his helmet as he prepares to evacuate. Gunnery Chief Ashley Williams approaches him and informs him that Joker is refusing to abandon ship. She's not leaving either. Ordering her to the escape pod, Shepard rushes to the bridge where he convinces Joker it is hopeless to try and save the crippled Normandy. Helping him up he puts him in the escape pod. Distracted by an approaching explosion, he hesitates. A sudden rush of air causes him to be pulled away. Desperate, he hits the button to launch Joker's escape pod before he drifts away. Suddenly he realizes his hardsuit has been punctured. "NO!" he says as he suffocates. Slowly he dies; the Normandy falling to the planet below with him.

Shepard woke up two years later on a Cerberus space station. Chaos was all around him. A voice above him, Miranda Lawson, urged him to grab his armour and pistol from the nearby armour locker. Ducking down he moves through the door and heads away from the med bay, taking out mechs along the way. Meeting up with Jacob Taylor, he learns what happened: he died. He was gone for two years. Now he's back, but the last thing he remembers is the Normandy getting shredded, sending Joker to safety, and suffocating. Eventually he meets with Miranda, who executes the traitorous Wilson. He meets with the Illusive man who has a request: Go to Freedom's Progress and find out why the colonists vanished.

Continuing to build the teamEdit

Lair of the Shadow BrokerEdit

In 2186, following the destruction of the Alpha Relay, Shepard returned to Earth to face the music for the deaths of the 300,000 Batarians. While in a hearing with the defense council, the reapers attacked Earth. UK Headquarters reported in, reporting heavy casualties and a desperate situation. After the city of Vancouver came under siege, Admiral David Anderson escorted Shepard to the SSV Normandy SR-2, where Lieutenant James Vega, Lieutenant Commander Ashley "Ash" Williams and Flight Lieutenant Jeff "Joker" Moreau picked him up. David Anderson refused to come with them and stayed on Earth to organize the resistance movement against the reaper threat. As he was lifting off world, Shepard witnessed the death of a young boy when the shuttle he was in was shot down by a reaper.

Barack, Liara, and Garrus were dispatched to the Salarian homeworld of Sur'Kesh, joined by

Determined to destroy the Reapers, Barack bravely sacrificed himself aboard the Citadel on December 9th, 2186. His body was never recovered.

In honor of his contributions to humanity and the galaxy at large throughout the final years of his life, the Systems Alliance constructed a new training academy on the site where he was born. Trainees sent to the Shepard Academy for Outstanding Soldiers were considered prime candidates for N7 Training and Spectre candidacy.

Retrieved from "https://masseffect.fandom.com/wiki/User:Burkenation?oldid=382926"
Community content is available under CC-BY-SA unless otherwise noted.