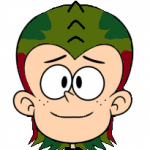 My nickname is to honour my OC Troy Troy Ekirixis. On Polish ME wikia I am an administrator since 7-7-2014.

Troy Ekirixis was born on Kajhe. Since childhood he thinks that his kind is underestimated by the rest of the sentient species. Since always he's dreamed about increasing influence of drells in the galaxy. He worked as a sabotuer before taking a rank of the first drell spectre. He earned the status by defending his officials from an unit of Eclipse merceneries alone only by omni-tool, he sabotaged computers in their armors and weapons and caused explosions.

Since Troy became a spectre, Shepard has been his biggest rival, althought they never met. The drell spectre grows more and more jealous with every success of the first human spectre, but gets more determinated to supress his rival. His other hobby is construting bombs and mines that infects computer systems in explosive radius.

He's afraid of Kepral Syndrome so much that he wears a respirator mask most of the time. He spent big part of his salary on genetic modifications to become more durable in fight. Because drells aren't spread on the galaxy like turians or humans, Troy always feels alien among citizens of places he visits, when on duty.

Retrieved from "https://masseffect.fandom.com/wiki/User:FirstDrellSpectre?oldid=469063"
Community content is available under CC-BY-SA unless otherwise noted.